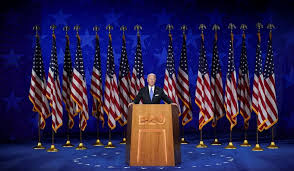 Reflecting on a presidential campaign unlike any other, the virtual Democratic Convention sheds light on the issue for Joe Biden’s voters: preserving democracy.

For those familiar with the almost centuries-old ritual of presidential conventions held by American political parties, the folklore and energy of which provide a decisive momentum to the presidential election campaign every four years, the one that the Democratic Party commenced on Monday, Aug. 17 has undoubtedly been the least conventional of all.

What is traditionally a major political spectacle in an overheated indoor arena is being replaced this week, due to COVID-19, by a two-hour virtual show where speakers speak from their homes every evening until Thursday. In the United States, a political convention consists of three or four days of eloquence, music, standing ovations, laughter and occasional tears, and especially militant enthusiasm which, crowned by the release of balloons after the candidate’s acceptance speech, encourages him or her to get fired up while facing the final leg of the campaign.

None of this will hit people’s screens this year, neither for candidate Joe Biden’s Democratic Party, nor for candidate Donald Trump’s Republican Party. This 2020 campaign is unlike any other; the Democratic Convention, which was supposed to be held in Milwaukee before the pandemic killed almost 170,000 people in the United States, is an inevitable reflection of this.

Two factors define this campaign: the coronavirus and Trump. Because while the pandemic has profoundly affected the 2020 election, from the primary season to the organization of the polls on Nov. 3, it is the incumbent president, a president like no other, who is at the center of it all. Michelle Obama, whose speech concluded the first evening of the Democratic convention on Monday, was right, attacking the man who succeeded her husband in 2016 head-on: “Donald Trump is the wrong president for our country,” she said gravely. “Clearly in over his head. He cannot meet this moment” that the United States is going through.

Bernie Sanders, Biden’s unfortunate rival in the primaries, didn’t hesitate to compare this “moment” to the one that struck Nazi Germany: for him, “this election is about preserving our democracy.”

This is not an exaggeration. Even more serious than the reduced format of the conventions is the complexity of organizing the vote on Nov. 3 if the pandemic continues to rage, as well as the fact that Trump is deliberately arousing suspicions about possible mail-in voter fraud. These factors have potentially serious consequences. Traumatized by the inability of the ruling party in Washington to control the COVID-19 pandemic, an increasing number of Americans are now wondering if the same party will be able to ensure the validity of the ballot and accept their potential defeat on the evening of Nov. 3.

Therefore, the challenge is twofold for Biden, running mate Kamala Harris and the Democratic Party. They obviously need to promote a genuine alternative political agenda that goes beyond merely rejecting Trump, thanks to whom Biden is currently enjoying a lead in the polls. But they also need to arouse enough Democratic support and motivation in the electorate so that the victory of the Biden-Harris ticket, if confirmed by the ballot box, is widespread and resounding enough to be indisputable. For this, the energy injected by a traditional convention would have been useful.