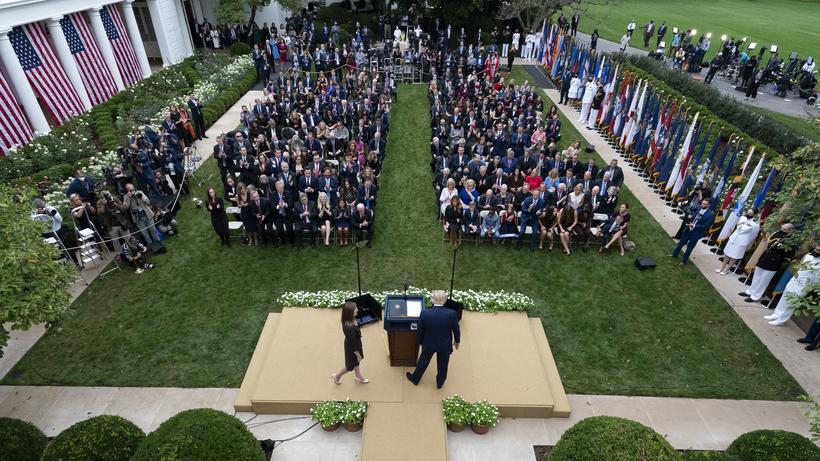 Just like their president, the Republicans have also made every effort to downplay the coronavirus. Now, many in the party have been infected as well. That’s not a good sign shortly before the election.

How is Donald Trump doing? At the moment only a few people know and those who do are contradicting each other. Trump’s physician, Sean Conley, gave a press conference on Saturday morning during which he did not tire of emphasizing that the president was doing “great” and that he even had a lot of work brought to him in the hospital. He dodged certain questions with notable obstinacy, for example about whether Trump had to be administered oxygen in the meantime.

Then a video from Trump’s chief of staff, Mark Meadows, appeared, who asked the expectant press in front of the hospital to only speak “off the record.” Shortly afterward, a statement from an anonymous source from the president’s circle ran on every news station. It painted an entirely different picture from that of personal physician Conley. It claimed that Trump’s vitals were worrying, with the next 48 hours critical for the future course of the illness. Later that day, the media decided to break with convention and name the source: Mark Meadows.

It was the preliminary climax of an already bizarre news cycle: The White House’s chief of staff is unofficially contradicting the White House physician’s official portrayal? Why? And who is correct?

In the end it’s not about a triviality, but about the question of whether the president of the United States could soon be no longer fit to govern. There has probably not been such a serious situation since the assassination of Ronald Reagan in 1981; and in this of all situations, in which Americans have an interest in being informed as reliably as possible, White House representatives are employing a cover-up tactic.

A Crisis of Trust

The political crisis that is playing out right now in Washington does not just consist of the fact that Trump is lying in the hospital with a potentially deadly infection, it is also a crisis of trust. Within hours, things developed in such a way that basically no one could be believed anymore — and that’s saying something in the post-factual Trump era.

For one thing, there is the chronological sequence of events. The New York Times published an elaborate investigation according to which Trump could have been infected during all of last week on every possible occasion. His counselor, Hope Hicks, already had symptoms on Wednesday. Ronna McDaniel, the chair of the Republican National Committee, likewise tested positive on Wednesday. Trump had previously met with her on Friday. Trump flew to a fundraiser in New Jersey on Thursday, where supposedly he already seemed lethargic. At the press conference on Saturday morning, Conley refused to answer the question of when the president had last tested negative and mentioned that 72 hours had passed since Trump’s diagnosis. Trump had communicated late Thursday night that he and his wife Melania had tested positive on Thursday evening. So, who isn’t telling the truth here? Conley later corrected himself to 48 hours in a press statement, but by then doubt had already set in.

Now, one could argue that Trump and his Republicans have never cared much about being measured by facts, but this is different. With Trump’s illness, the pandemic that the president had wanted with all his power to remove from political awareness has moved into focus a month before the election that will decide everything. And the Republicans, who have followed after Trump in his strategy and who have downplayed the coronavirus, who don’t wear masks and a majority of whom reject the corresponding regulations, are now just as deeply involved. Things could hardly develop worse for them right now.

In the president’s immediate environment multiple people have been infected at once. For example, Trump’s confidante, Kellyanne Conway, who until recently had worked as an influential advisor in the White House, or the prominent governor of New Jersey, Chris Christie, who according to his own statement went to the hospital as a “precautionary measure.” Three Republican senators also tested positive which could endanger the timely confirmation of Trump’s nominee for the Supreme Court, Amy Coney Barrett. That would not just be a severe personal loss for Trump, who could popularize himself with evangelical and catholic voters by filling this seat, it would also be fatal for the Republican Party if, because of the coronavirus of all things, they miss the chance to implement a conservative agenda at the highest court for the coming decades.

But even so, the message sent isn’t a good one. Last Saturday, Trump threw a garden party at the White House in Barrett’s honor. Melania Trump, Kellyanne Conway, Chris Christie and two of the three infected senators were present. Photos show the guests tightly packed and sitting and standing next to each other, mostly without face masks. On the internet, a video spread of Sen. Mike Lee from Utah who later tested positive and hugged three guests, none of whom were wearing a mask.

The photos of the garden party show a Republican elite celebrating as if nothing had happened, while at this point in time over 200,000 people in the United States have already died of COVID-19. Now, it has become obvious to everyone that such risky behavior has consequences and not just personal ones. The country is falling into a historical crisis of leadership. A president in a dubious state of health and a White House that raises more questions than answers — this doesn’t exactly contribute to the government’s credibility.

Meanwhile, the campaigning continues unabated and Joe Biden continues to lead in the polls. The Trump campaign, on the other hand, must now go not only without its candidate, but also without its manager. Trump’s top campaign strategist, Bill Stepien, has also tested positive and this comes after his predecessor, Brad Parscale, who was active with the campaign until then, was hospitalized because of allegedly threatening to harm his wife and himself with a weapon.

However, the Republicans don’t just want to win the presidential election, they also want to keep the Senate and take back the House of Representatives. The news of the superspreader event in the White House comes at a bad time for this, too. The television duel between Trump and Biden on Tuesday likely caused the campaigning Republicans to bury their faces in their hands. The first polls from the vital states of Florida and Pennsylvania suggest that Trump’s behavior did not go over well with voters.

Trump’s coronavirus infection could also hurt him and the Republicans. For months he acted as if the coronavirus was harmless, but now he himself is an at-risk patient in the hospital. Again and again Trump mocked wearing masks, even at the debate. Suddenly, he and high-ranking White House employees have been seen publicly with face masks which, so it is said, they’ve left at home until now in order to make their boss happy.

Trump acted as if he were unassailable, but now has revealed that he is as vulnerable as everyone else. His party also did not hold him back on this issue and that could come back to haunt them. For example, the two infected senators who were also at the party for Barrett, have announced that they will only go into quarantine for 10 days in order to be able to vote for Barrett as a Supreme Court justice. However, the Centers for Disease Control and Prevention recommended a quarantine time of 14 days. Now that the public can follow live how easily the virus is presumably spreading in the White House after a single gathering, such tactics are quickly seeming cynical.

A Political Deadlock Is Impacting Society

In the face of the tightly packed, numerous gatherings in political Washington, it would be astonishing if no more infections occurred. What happens if Congress is no longer able to act? A congressional recess has already been announced until Oct. 19. What happens if the stimulus package eagerly awaited by many U.S. citizens cannot be passed due to this? The risk of a political deadlock that will directly impact society and can considerably influence the election is not caused only by Trump’s illness. The chain of infection within the party, of which Trump is obviously a part, endangers the ability for political action as well.

The president himself reached out on Saturday evening with a video from the hospital, presumably to limit the damage from the press conference. “I came here, wasn’t feeling so well,” said Trump. He seemed pale and spoke with a hoarse voice. The president said he feels much better in the meantime and added: “I have to be back.” Chief of Staff Meadows appeared on Fox News and said once again officially that things had been quite concerning on Friday afternoon and that Trump’s oxygen saturation levels fell “rapidly.” The White House is still working on the right staging.

However, a virus cannot simply be staged –- and voters cannot be put off forever. In this respect, it is not just Trump’s health at stake, but more and more, his electoral success as well.

About Michael Stehle 6 Articles
I am a recent graduate of the University of Maryland with a BA in Linguistics and Germanic Studies. I have a love for language and I find translation to be both an engaging activity as well as an important process for connecting the world.