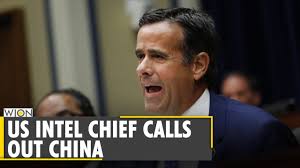 On Thursday, the Trump administration made a few moves regarding U.S.-China policy, including the announcement of restrictions on Chinese Communist Party members and their families from going to the United States, changing their 10-year visas to monthly visas. Four Chinese companies, including Semiconductor Manufacturing International Cooperation and China National Offshore Oil Corporation, were added to the Department of Defense blacklist. Furthermore, Director of National Intelligence John Ratcliffe published a hysterical anti-China article in the Wall Street Journal, creating a precedent of showing all Americans what is shown to the president.

Ratcliffe wrote that China “poses the greatest threat to America today, and the greatest threat to democracy and freedom worldwide since World War II,” its approach of economic espionage is to “rob, replicate and replace,” and its companies will replace American companies in the global market. He even falsely claimed that China conducted human testing on members of the People’s Liberation Army in hopes of “developing soldiers with biologically enhanced capabilities.”* He is putting Hollywood’s dream of creating Captain America on China’s head. Later in an interview with Fox News, he specifically addressed the Biden team, requesting that the new administration acknowledge that “China alone is the greatest national security threat that we face.”

Trump’s team is frantically introducing new anti-China measures, and they are seemingly hurrying to take all measures that they did not dare to take in the past before they leave office. They are suddenly using their last days in office to destroy any chance of repairing U.S.-China relations in the next four years. Given the importance of U.S.-China relations to all of humanity, their actions are not only a dismissal of political responsibility, but also constitute an anti-human attempt to turn back history. Simply put, they are committing a crime.

As to what kind of U.S.-China relations will have an influence on the nature of international relations, this administration in its final days has completely opened up about its intention to create a U.S.-China cold war. Confrontation between world powers is a huge cost to humanity; it will severely weaken the resources used to improve the welfare of the people. The current American administration does not care about this at all, however, and is taking an ax to the tree of U.S.-China relations that has finally managed to flourish.

These actions are just one way of showing that they refuse to admit defeat. They will leave office, but the path of U.S.-China relations that they have created will remain, and their attack measures will turn into ropes tying down the next administration, forcing the Biden team to follow the procedures they have set up to fight China. At least on the issue of relations with China, they want to make the new administration become a “Trump administration wearing a Biden mask.”

Besides consolidating their own “new cold war legacy,” the Trump team wants to create problems for the Biden team, paving the way for the Republican Party comeback in the next general election in four years. If the Biden administration continues to implement the current policies, the Trump team can take the credit; if the Biden administration makes adjustments to ease relations with China, the Republican Party can attack Biden’s weakness with China in the context of the U.S. This is a big trap.

There has never been an American administration so determined to dig a hole for the next administration, which begs the question of how thorough the transfer of power is in the U.S. The Trump administration wants to have beyond-their-term-in-office control of U.S.-China relations. This is the same as locking the doors to several important rooms in the White House and taking the keys with them.

Poisoning the U.S.-China relationship with such unprecedented intensity will inevitably lead to a poisoned environment. Ratcliffe proclaimed that because of China’s “intellectual property theft,” the average U.S. household will lose an average of U.S. $4,000-6,000 a year. The actual situation is likely to be that, as soon as there is a cold-war-style U.S.-China confrontation, the numbers that he fabricated will actually become a reality for American families.

If this administration is allowed to squander U.S. diplomatic and security assets and overdraw its power to undermine U.S.-China relations and world peace, both the U.S. and the rest of the world will suffer a loss. This administration has already destroyed the U.S.’ fight against the pandemic, and has caused a daily death toll that is close to the 9/11 terrorist attack. If they are allowed to destroy the future of U.S.-China relations, it will be equivalent to letting them leave behind a criminal political virus that will be harmful to the world in the long-term.

*Editor’s note: Though the quote has been accurately translated, it could not be independently verified. The reference to Captain America refers back to that quote.