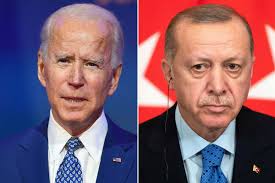 A month before he leaves the White House, the outgoing American president has called for a resolution imposing sanctions on Turkey, something he has hinted at since 2017 when Ankara purchased a S-400 missile system. Ankara received the missiles in July 2019 and has finally field tested them.

Donald Trump’s sense of timing makes one wonder why he was reluctant to call for sanctions, especially after he rushed to freeze Turkey’s participation in a project to manufacture the latest F-35 U.S. fighter jet under the pretext that the Russian system “could” reveal its technological secrets. Moreover, in response to the American president’s anger, the Turkish president has stated more than once, “We are determined, we will continue on our path … We aren’t going to ask America” for permission.

Despite all that Ankara has said and all it has rationalized, especially its continued references to the S-300 owned by its NATO partner Greece, Ankara is abuzz with complaints and condemnation of Trump’s order, and has called it a serious mistake, unfair, and unjustifiable. But Ankara was more careful when the Turkish foreign ministry said it would respond with “the necessary steps against this decision,” noting that it called on Washington again to solve the issue through dialogue.

Dialogue is no longer possible now that Trump has become a lame duck president. His imposition of sanctions on Turkey may perhaps be the last trick up his sleeve now that the Electoral College has certified Joe Biden’s victory and consecrated Trump’s defeat. Trump refuses to acknowledge his loss despite losing every objection and appeal in court.

The ball is now in Recep Tayyip Erdoğan’s court. It seems that he has nothing up his sleeve to use in response to Trump’s sanctions—which are in addition to the “light” sanctions” imposed by the European Union, that may possibly issue more severe sanctions soon, given the U.S. sanctions order. In light of what President-elect Biden has promised regarding Turkey and Erdoğan in particular, there remain several of his measures and positions to deal with, such as Biden’s readiness to support the Turkish opposition, and to cooperate with them to bring down Erdoğan because of his dictatorial and repressive record, as Biden has said.

The Turkish president has begun a “turning” operation in his regional relationships, especially shifting toward Israel (and Saudi Arabia, which was hostile to Turkey and its aggressive plans) in anticipation of the positions the new administration may take against Ankara, whether in the eastern Mediterranean—in support of the European Union, as well as Cyprus and Greece—or in Syria, Libya and Iraq. The action Erdoğan will take in this regard reflect a deep concern about difficulties he may face with Biden and his administration. This is why Erdoğan resorted to appointing as ambassador to its enemy, the Zionist entity, an Israeli university graduate proficient in Hebrew who maintains close relationships with Israel’s political, partisan and civic elite. As for Erdoğan’s new ambassador in Washington, it is said that he is a friend of Biden and a graduate of the same university Biden attended, although of a much younger class.

Trump’s sanctions against the Turkish government agencies charged with purchasing weapons and the sanctions he imposed on its leader could be less of a burden than expected. However, Erdoğan’s margin for maneuver is reduced for all practical purposes, although it cannot be compared to Trump’s policy of maximum pressure through the sanctions Trump has imposed on Tehran, sanctions which may buy some breathing room if Biden returns the United States to the Iran nuclear agreement. Then, perhaps, Ankara may bear the brunt of the Biden administration’s anger, but will do so without following in Trump’s imprudent and arrogant footsteps.