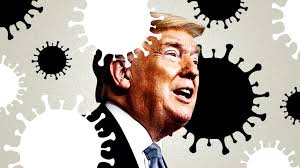 The death toll of 400,000 apparently results from of the arrogance, cynicism, contempt for scientists and lies characteristic of the [former] American president.

Just four years ago, Donald Trump promised a shocked world that “American carnage stops right here.” The night before departing the White House, the Republican president leaves a country in shambles behind him, ridden with rarely rivaled divisions and entrenched in unheard of political violence, and above all else, destroyed by a stealthy pandemic that is totally out of control in certain locations.

His management of the health crisis, defined time and time again by indifference, denial, lies and politicization, leaves the United States with numbers unlike those in the rest of the world: more than 400,000 deaths in 11 months, and 23 million people infected.

As for the rest, by denying the gravity of a virus that he contracted himself, by claiming despite all evidence that “like a miracle, one day it will disappear,” by obstinately refusing to promote basic precautions — wearing masks and social distancing — and by giving priority to economic interests over the risk to public health, the exiting president encouraged a deathly laissez-faire attitude in the states governed mainly by Republicans, and complicated the task for newly elected officials, many of whom are Democrats, determined to fight the pandemic.

The current carnage therefore appears to be the consequence of a mixture of arrogance, cynicism, contempt for scientists and shameless lies characteristic of Trump’s personality, the first leader ousted because of his catastrophic choices concerning COVID-19.

Joe Biden will inherit this grim record. His first weeks in the White House where he takes up residence on Jan. 20, will be completely devoted to fighting the pandemic and working toward recovering the American economy. The Democratic president, mocked by his opponent for wearing a mask and taking precautionary measures against COVID-19 since last spring, gave a solemn speech on Jan. 14 detailing the measures he plans to take to contain the spread of the virus. Biden promised financial and logistical efforts in order to better distribute the vaccine, to improve protocols for testing and tracing, and to fight against new variants of the virus.

Once again, Biden also showed the empathy that his predecessor was incapable of during these last 11 months during which almost 400,000 American families lost one of their own. But comforting words won’t be enough. Biden will have to get his bailout plan passed by a Congress torn by the impeachment of an incumbent president after his supporters assaulted the Capitol.

While the virus is surging again in several countries, there is no miracle cure that will allow us to wash our hands of it so quickly. The Democratic president’s team is not without its strengths, however. His incoming chief of staff, Ron Klain, coordinated the federal response to the Ebola virus in 2014, and his main advisers are all familiar and respected experts. It is to be hoped that this administrative coherence will improve federal strategy and through example, give the country clear guidelines, a discourse based on science, and a solution based in reality. Something quite the opposite of the lies and procrastination we received from the outgoing president.