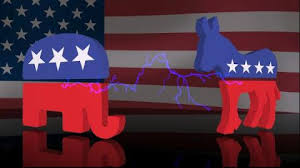 A political migration in the opposite direction began to take place, with the moderate Republicans of the Northeast moving toward the Democratic ranks

In the seven decades running from 1861 to 1932, the Democrats managed to install only two presidents in the White House, representing what was clearly a minority party. During this period, the white population in the South formed the Democrats’ base; this turned it into a party that was compelled to keep the Black population under control in the states that had previously formed the Confederacy. Franklin D. Roosevelt’s victory in 1932 would represent a defining moment and a springing into life for the blue side of the U.S. political equation.

Thrust into power by the Great Depression, Roosevelt’s arrival would define a rebranding of the party, transforming it into the dominant political force over the following decades. His New Deal would trigger an environment of ambitious, progressive policies in the economic and social realms. This would attract the mass of working classes of the North and minority sectors throughout the country to the heart of the party, including important sectors of the Black population that had until then been a captive Republican demographic. Although the new policies would bring no shortage of problems vis-à-vis the white population of the South, the party’s traditional base, they did not leave the party’s ranks. This is how the Democrats gradually transformed into a powerful, although heterogeneous, coalition.

It was a coalition that was subject to immense contradictions, as evidenced even within Roosevelt’s government. Seeking to win the support of powerful Southern Democratic members of Congress for his agenda, Roosevelt was forced to guarantee them that the power relations in their region of the country would not change. This involved leaving intact the segregationist policies that reigned supreme in the South. Starting with Roosevelt’s successor, Harry Truman, this situation began to change, and the Democratic Party would take its first steps in favor of Black civil rights.

The civil rights policy conceptualized by John F. Kennedy and implemented by Lyndon B. Johnson upon Kennedy’s death would consolidate the Democrats’ progression along this path. This would cause the “Dixiecrats,” the nickname for Southern Democrats, to feel out of place within a party that they had once dominated. At the same time, the 1964 Republican presidential candidacy of Barry Goldwater would present the Dixiecrats with the opportunity to turn toward this political grouping. Goldwater’s candidacy was founded on a mistrust of the federal government and the promotion of the rights of state and local governments. In other words, while the strong federal government proposed by the Democrats attacked the segregationist policies that Dixiecrats upheld in the South, the Republicans aimed at reinforcing the autonomy that the Southerners were seeking. From this moment on, the white Southern population emigrated en masse to the Republican ranks.

The movement of the white South to the Republican Party diminished the presence and influence held by those who had traditionally controlled the party: the conservative moderates of the Northeast. Increasingly marginalized in a party that continued to move rightward, the moderates further lost their grip on power with the avalanche of former Democrats arriving from the South.

A political migration in the opposite direction thus begun to take place, with moderate Republicans from the Northeast moving toward the ranks of the Democrats. This allowed the Republicans in the South and the Midwest to become the new core of the party. In both instances, it was a case of white populations marked by a militant Christianity and conservative values that penetrated the furthest reaches of society.

Curiously, the more relaxed Californians spent a brief period in the erstwhile core of the party, a marriage of convenience. The coalition, known as the “Sun Belt,” revolved around the shared rejection of a strong federal government. However, with the arrival of the 1990s, Californians felt increasingly estranged from the style and values characteristic of the South and the Midwest. With the divorce of the two groups, the Republicans consolidated their status as the “white” party from the “heartland,” possessing strong religious convictions and guided by nostalgia for a more homogenous nation.

Donald Trump managed to make an important contribution to this Republican base by drawing in the white working classes from the Rust Belt. Displaced by globalization, they infused the party with their own nostalgic overtones about the past and about lost racial homogeneity. This has contributed to reinforcing the racial and cultural uniformity of the party, turning it into an identity-based movement.

In contrast, the Democratic Party of today represents a broad coalition of races, identities and cultures. In this respect, its policies constitute the natural means to maintain unity among diverse groups. This being the state of affairs, while rationality provides the raison d’être for the Democrats, the survival instinct is what drives the Republicans.