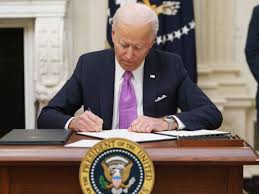 The new president of the United States drastically changes the policies of his predecessor.

In just 10 days, Joe Biden, the new president of the United States, has signed more than 30 executive orders with which the Democratic administration intends to amend the entire term of Donald Trump, a president who also resorted to those orders to rectify the presidency of Barack Obama.

It’s even more apparent things have taken a turn for the better with the image of institutionalism and devotion to public service expressed by the new cabinet in which officials, the foreign service and the Pentagon have received the qualified treatment that Biden’s predecessor, obsessed with the idea that a deep state wanted to steal democracy from the citizens, neglected. The first phone calls from the Oval Office also constitute a rectification, both because of the guarantees given to the allies and because of the demanding attitude toward Russian President Vladimir Putin, which contrasts with Trump’s understanding attitude toward authoritarian regimes. On top of all that, there is the launch of a colossal financial package to recover from the pandemic* and the clear signs toward the reopening of Cuba.

Many of the decisions have come in the form of executive orders and take seemingly very wise turns: the return to the Paris climate agreement, the elimination of the travel ban that prohibited individuals from primarily Muslim countries from entering the United States, the cancellation of the Keystone XL pipeline construction permit, the halting of the wall on the border with Mexico, the recovery of the integration plan for young children of immigrants born in the United States, the authorization for transgender soldiers to serve in the military, the revitalization of Obama’s health care reform and the support for the reproductive rights of women that were taken away by Trump. On the other hand, it seems the continuity of protectionism, embodied in the order that promotes the administration’s purchase of products made in the United States, is surrounded by both doubt and strong propaganda.

All these executive orders have their programmatic nature in common. They are very significant, but their effects are limited and require additional, more difficult legislative and budgetary work, in which little progress will be made if Biden fails to implement his program of national unity and bipartisan collaboration. In reality, a true turn for the better that could reverse a presidency as dire and divisive as Trump’s is another presidency capable of overcoming partisan polarization and regaining the lost sense of unity among the three powers and between Americans and their local, state and federal institutions. That will be the measure of the success of Biden’s tenure.

*Editor’s note: Biden proposed a $1.9 trillion COVID-19 relief package on Jan. 14, however, it has not yet been passed by Congress.