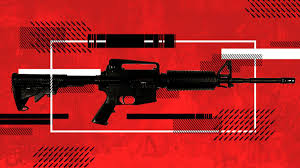 After a new deadly shooting in Colorado, the American president has called for a ban on assault weapons. But stricter control on the bearing of arms seems impossible to get a political minority in Congress to accept.

A fundamental right of Americans, the right to bear arms, persists in the United States in spite of the tragic episodes the country has regularly experienced. The most recent to date: In Colorado, a man slaughtered 10 people in a supermarket using a semiautomatic rifle. This, less than a week after another killing that cost the lives of eight people in Asian massage parlors in Atlanta, Georgia. It is a morbid recurrence that revives the perennial debate over firearms proliferation in the United States.

In response to these dramas, Joe Biden has called on Congress not to “wait another minute,” promising executive action to ban assault weapons. A fervent defender of this cause, the elected Democrat promised during his campaign to make the regulation of firearms a priority from the first day of his term, a promise which he has failed, thus far, to deliver. Under the Barack Obama administration, the attempt was made, without success, to reform this right, the proposal going down to defeat in the Senate under pressure by the powerful arms lobbying group, the National Rifle Association.

While American public opinion is overwhelmingly in favor of gun control, especially background checks of purchasers and a waiting period before the purchase of a weapon, which exists in several states, fundamental reform of the practice nevertheless seems impossible. What is preventing it? Can Biden really make it happen? For two specialists on the U.S. interviewed by Les Echos, that appears unlikely, even impossible, in a country where the gun sales reached record levels in 2020, and where nearly 400 million firearms are in circulation.

A Fundamental Right Written into the Constitution

In the United States, the right to be armed is guaranteed to citizens by the famous Second Amendment to the Constitution, in the name of self-defense.* The bearing of arms is thus first regulated at the federal level, then by each state, the consequence of which is that the interpretation of the constitutional text on this subject varies widely.

Thus, it is difficult to imagine a hard-line elimination of the right to bear arms for American citizens, 30% of whom, in 2017, were in possession of at least one weapon, according to the independent Pew Research Center. “The cultural and political landscape is therefore complicated on this question,” Nicole Bacharan, historian, political scientist and specialist on the United States, explained to Echos. “With the tradition of seeking justice for oneself, or for self-defense without waiting for the state, as well as the power of the military-industrial complex, and of the NRA,” only those reforms centered on the control of firearms are acceptable to the public.

“In 2019, Americans were heavily in favor of increasing financing for the monitoring of the mental health of potential arms purchasers,” confirmed Marie-Christine Bonzom, a political scientist and journalist who specializes on the United States. “By contrast, when asked if they agreed with a mandatory repurchase of arms by the government, public opinion becomes inflamed, for fear of being disarmed,” she reflected.

Gun Control Reforms Blocked by the ‘Tyranny of a Political Minority’

“The American political class never finds the time or the moment to act in a fundamental way on this very politically risky issue,” Bonzom said. All the more so as the exercise is complicated in the current climate. In Congress, “the Democratic majority has been reduced since last year in the House of Representatives, and Joe Biden walks a tightrope in the Senate, constantly negotiating with Republicans, but also with centrist officeholders,” the political analyst opined. The promise of “tough executive action” on arms by the American president last Tuesday thus seems in jeopardy.

“There is an evident problem of representation,” Bacharan added. “One witnesses the tyranny of a political minority, supported by the powerful NRA lobby,” she said. To illustrate, the scholar recalls the hope of change at the federal level on the bearing of arms after the Newtown shootings in 2012 that left 27 dead, 20 of whom were children. At the time, Biden, then vice president, had “pushed to the maximum to implement a ban on assault weapons,” without success. “Nothing can happen until elected officials change their attitude,” she summed up.

These elected officials who “blockade” action are always pressured by the NRA, which finances election campaigns at the federal level in particular, such as that of Donald Trump, and at the local level, and is capable of making or breaking a political figure. Although weakened by lawsuits and financial difficulties, the organization of firearms owners “remains active in Congress, especially toward Republican elected officials,” Bonzom explained.

Actions ‘around the Edges’

“If measures are taken by Joe Biden on firearms, they will be actions around the edges, which will not really change matters,” Bonzom concluded, indicating that the Democrat’s proposals are nonetheless important and that they “are going in the right direction. Only piecemeal measures pass, whether or not they are accepted by Congress.”

The researcher feels, moreover, that the United States might be inspired by Australia to take the road toward arms suppression. In 1996, that country adopted fundamental reform banning semiautomatic arms and toughening controls. So far, many proposals have already been made, without ever reaching the federal level. Not far from the Australian model, “there are nonetheless local programs, as in New York, where legislation against bearing arms is very strict, and which could be extended,” which is what Bacharan hopes.

*Editor’s note: The Second Amendment provides “A well regulated Militia, being necessary to the security of a free State, the right of the people to keep and bear Arms, shall not be infringed.”