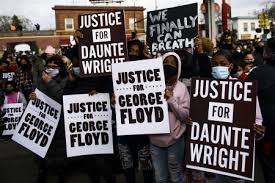 A unanimous verdict reached in such a delicate case after just 10 hours of deliberation is proof that the facts — and the images — left no room for any reasonable doubt. And it is proof that the alternative argument that officer Derek Chauvin’s lawyer tried to maintain regarding George Floyd’s preexisting condition was never really credible in the eyes of the jury.

Thirty years after the officers who beat up Rodney King were acquitted in Los Angeles, and seven years after the absence of any charges for the officer who killed Michael Brown in Ferguson, Missouri, American society is living a tragic and rare moment after the verdict on Tuesday afternoon. A sort of redemption — however momentary. As if there were a little, very tiny bit of justice for all African Americans who, because of the racist and segregationist reflexes of others, have always been denied the most basic justice. “There is light,” said the activist Rev. Al Sharpton reacting to the murder verdict.* With Floyd’s death, all of the obscurity and opacity of the past have resurfaced.

It is understood that Chauvin would still undoubtedly be a Minneapolis police officer if Darnella Frazier, who was 17 at the time of the incident, had not filmed those nine minutes and 29 seconds during which Chauvin crushed Floyd’s neck with his knee.

It is equally understood that Americans would have undoubtedly succeeded in burying the crime in the back of their national conscience if this murder on May 25, 2020, now punished by law, had not, for the past year, given rise to this historic mass movement against racism and police brutality — marked by a large, determinative effort to undo selective white memory.

This judgment also represents an indelibly remarkable moment of social, judicial and political convergence in U.S. history; as it accompanies the election of Joe Biden after four years of Trumpian regression, and the promises Biden himself has made to pursue social progress and racial equality. It is a Biden who was, of course, elected by centrists, but who owes much, including his election and those of the two Georgia senators giving Democrats a Senate majority, to the mobilization of the Black minority and civic organizations.

Chauvin had a funny look in his eyes after the verdict was read. During the four weeks of trial, his colleagues let loose on him, witness after witness. They painted him as a black sheep. Inside the four walls of the courtroom, the defense and prosecutors alike did their best to make this trial about one single man, without regard to the system and the culture of abuse among Chauvin’s fellow officers. Yet, at the end of the day, demonizing Chauvin alone for his inhumanity reduced the affair to an anecdote. It is the institution as a whole that should be brought to trial for all of American society to watch.

It is true people have reflected on the situation for a year, and that people have begun to take action. Several states have engaged in reforming their police force. Washington announced the opening of an investigation into the Minneapolis police department on Wednesday, while Congress has already received a draft of an important bill entitled the “George Floyd Justice in Policing Act of 2021.” But there are numerous signs of conservative tension in Republican states that especially want to reinforce the power of police officers and criminalize public protests. There is political tension, too, while more than 40 state legislatures are working to restrain minority voting access. Pro-Trumpers are evidently not finished with this subject.

“The further we move backwards,” wrote James Baldwin in “Evidence of Things Not Seen,” a 1985 essay on the series of murders committed in Atlanta, “it is clear that the demand of Black people was never integration […] What they demanded was desegregation, which is a question all at once legal, public and social: the requirement of being treated like human beings and not like beasts of burden or like dogs.”* Vice President Kamala Harris spoke about this Tuesday evening after the verdict. “Black Americans and Black men in particular have been treated throughout the course of our history as less than human,” she said.

Chauvin treated Floyd like a dog. Justice was served, but there is much more left to do.

About Peyton Reynolds 37 Articles
I am a recent graduate from the University of Nebraska-Lincoln and an aspiring French translator who enjoys endless amounts of black coffee, good books, and hiking.