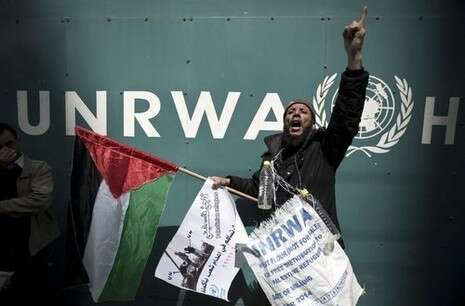 France, the Arab League and most of the Gulf countries and ethnic communities in Lebanon want to distance themselves from regional conflicts and save Lebanon from crisis. So why did Biden give priority to UNRWA?

Since his election and even before having 100 days of grace, President Joe Biden has made decisions which affect us and are raising eyebrows in our region. Right now, he looks like a politician who is trying to erase whatever his predecessor did, not like a statesman with an organized political plan.

For example, Biden decided to renew financial aid to the United Nations Relief and Works Agency for Palestinian Refugees. As if he didn’t know the details about the organization. UNRWA’ s raison d’etre is to perpetuate the refugee problem instead of solving it. As if the president has not heard that UNRWA registers the descendants of refugees from 1948 as if they themselves were refugees. As if he had never heard of Jewish refugees who were expelled from Arab countries — and I am one of them.

The American president’s decision is surprising. How is it that this organization, whose leader is suspected of corruption and whose time has come to join the U.N. Commission for Refugees in Geneva, gets preferential treatment despite its involvement in a dangerous episode that could ignite the Middle East? Lebanon is in the throes of economic, social and political collapse. There’s a monster there who is trying to get control of it for the benefit of his Iranian patron.

The collapse, if it comes to pass, will cause a serious crisis — not only a local crisis, but a regional crisis — and then the United States will intervene against its will. So why not invest effort now in saving Lebanon, instead of saving an organization whose sole reason for existence is in doubt? The only country that can save Lebanon is the United States. Russia cannot do it, as it is about to affirm the opening of a Hezbollah representative office in Moscow.

The Egyptian foreign minister and the vice general secretary of the Arab League recently met separately with Lebanese officials to discuss ways to stop the worrisome collapse. In the discussions, it came out that the Arab League, including Egypt, supports three important elements: not touching the Taif Agreement, which put an end to the civil war of 1975; declaring Lebanon’s neutrality at the request of the head of the Christian Church; and immediately putting together a government of technocrats. These three elements are meant to prevent Iran from carrying out, through Hezbollah, its plot in Lebanon. And yet, the president of the United States gives priority to UNRWA.

The United States has to act quickly in Lebanon, and it has the ability to do this. The U.S. can suggest an emergency economic plan in exchange for an end to the development of the arms industry set up by Hezbollah. It can bring Lebanon to the negotiating table with Israel to discuss establishing the sea borders between them. These actions will produce a great deal of income for Lebanese coffers.

France, the Arab League, most of the Gulf states, most of the ethnic communities in Lebanon and a few of the Shiites support the idea of distancing Lebanon from the regional conflicts and rescuing Lebanon from its current crisis. So why does Biden put UNRWA first, not Lebanon?