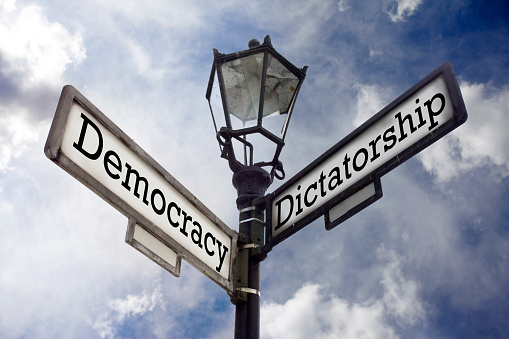 Dictatorships are emerging as rivals of democracies on the world stage. Despite the pandemic, it is time to think about an “alliance of democracies” to counter their growing influence so that respect for the rule of law and human rights are at the heart of globalization.

“The Western world does not represent the global public opinion,” China’s foreign affairs minister declared to the U.S. secretary of state. But what is the West, if not a certain conception of the human being and life in society organized in freedom through democratic means? With what would dictatorships replace those values that make so many people rise up? Those same dictatorships violate human rights, international law and even their own word.

They are united by their “common hostility toward the rule of law, human rights […]” wrote Nicolas Tenzer: war crimes in Syria; crimes against humanity targeting Uighurs in China; Russia’s violation of international law in Crimea and Georgia; and China’s involvement in breaking Hong Kong’s autonomy.

They take advantage of the upheaval wrought by the pandemic to emerge as rivals of weakened democracies on the world stage. As Tenzer pointed out, “a kind of ‘dictatorships’ alliance’ is discreetly emerging.” They double down on provocations and humiliations. China’s and Russia’s vetoes paralyze the U.N. Security Council on Syria, Myanmar …

They extend their influence in Africa, in the Balkans, in European countries and they target our infrastructures. They deploy their propaganda to destabilize our democracies and win over the weak-minded.

An Alliance against Dictatorships

How can we avoid this looming winter? The idea of an alliance of democracies was put forward by Joe Biden. It is subject to intense debate. For Tenzer, this alliance should be “a space for action,” rallying Europe, the democracies of America, Asia and Oceania. It would affirm the principles of international law, support our allies in Ukraine and Taiwan, and democrats in Russia, Hong Kong and Belarus. It would put an end to the action of dictatorships on our soil and their corruption.

But this alliance shall not be a club for the rich: It should be committed to peoples’ development through a fund financed by transferring the expenditures being sunk into weapons, as Pope Francis calls for. This would translate our commitment to human rights into action. For the trading of arms used against the people of Yemen and elsewhere undermines the trust in our democratic ideal, respectful of each human being.

Will we show humanity and courage? Let’s not forget that we depend greatly on these dictatorships: for essential products from China that buy in part our debt, from Turkey for “keeping” migrants that we do not want. Our materialism and our fears represent a weakness that prevents us from acting forcefully for the liberation of Alexei Navalny and democrats in Hong Kong, for ending crimes committed by the army in Myanmar.

Even if the situation today is difficult, it is imperative that the institutions and peoples of Europe become aware and mobilize. For it will take courage to resist economic pressures from those powers that would like to weaken our resolve. This will require work, inventiveness and the freedom that allows them to flourish.

Then maybe this winter of democracies will fade away to give rise to a new spring where this hope will shine, bringing along the peoples fervently seeking justice and liberty.

About Mireille Dedios 46 Articles
I’m an independent French translator based in the Boston area, certified by the American Translators Association (French into English). I honed my translating skills as part of the executive teams of various French and US companies, including State Street Corporation, where as a member of the Public Relations team, I tracked the news media globally and translated press releases into French. I enjoyed this work tremendously and continue to look for opportunities combining translation and news coverage, culture, history and international relations.