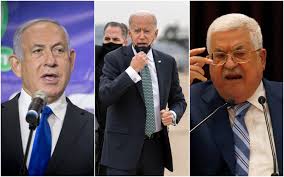 Since the start of his presidency, Joe Biden has distinguished himself by his undeniable seriousness. He has surprised us by surreptitiously sliding to the left. He has reassured his international allies by initiating a return to multilateralism. Despite a few missteps here and there, America seems to be back, just as the new president announced soon after his election. His presidency promised to be transformational. But May seems to reveal that the sunny outlook remains impenetrable.

While it is impossible to ignore the outbreak of violence in the Holy Land, the American president stayed silent for a long time. However, the outbreak has claimed at least 255 victims, 243 Palestinians and 12 Israelis, and has seen the destruction of several buildings across Gaza against a backdrop of unprecedented intercommunity clashes in multiple towns across the Jewish state. Moreover, these events have scuttled the formation of a coalition government, including the United Arab List party of Mansour Abbas, a first, organized to end the rule of Benjamin Netanyahu.

Alas, at the United Nations, the United States has been opposed to every Security Council resolution regarding the Israeli-Gaza conflict. Biden ended up hoping for a “de-escalation” only to pay lip service to the idea of a cease-fire 15 days after the start of hostilities. However, when presented with images of children among the ruins of Gaza, which faced disproportionate means of fighting and a disproportionate number of deaths, and when presented with the risk that any gains for the region as a result of the Abraham Accords would be eroded, there is perhaps a place for taking a bolder stance, more in line with the ideals repeatedly touted by the Democratic president.

There are many factors that may explain Biden’s position, which is out of sync with calls from the international community, and which is in contrast to the idea of “America is back.”

First, while ties with the Jewish state weakened somewhat under Barack Obama, American foreign policy has traditionally supported Israel. The United States has opposed the adoption of U.N. Security Council resolutions criticizing Israel 53 times in the last 50 years. The Biden administration seems to back in line with American foreign policy.

Second, there is a real Israeli-American military complex. Besides the establishment of an American military base in the Negev in 2017, Israeli firms are, for example, largely involved in providing officers and technological training on the U.S.-Mexico border. Moreover, the provision of arms to Israel is a key element of the arms industry in the United States. This month, the president informed Congress about the sale of precision weaponry totaling $735 million to Israel.

Third, Biden had announced that foreign policy should serve domestic policy. And in this case, both the powerful AIPAC lobby, which is run by pro-Israel Evangelicals, and Trumpists in the Republican Party weigh heavily in the balance at a time when Biden is trying to push big programs through Congress.

Fourth, Biden has personal experience with the region, both as a senator and vice-president. He can only have a keen understanding of the extent of political dysfunction on both sides of this complex chessboard, all the while having close proximity to the Jewish state whose leaders he has met over several decades. In his speech last Thursday, Biden clearly reiterated his desire to opt for a less flamboyant, behind-the-scenes kind of diplomacy, and his decision-making style is becoming clear.

Fifth, with regard to the Middle East, Biden is staying the course of disengagement started by his predecessors. The center of American geopolitics is in Asia, and the Holy Land is not a priority. What remains to be seen is whether the region eventually imposes itself on Biden, as it did with his predecessors.

Because there are real risks in conducting an underhand form of foreign politics.

First and foremost, the moral commitment of the United States (whether you agree with it or not) is sometimes enough to curb warlike impulses, and its absence could increase the shift in tensions that are likely to define the next decade in the region. The geopolitics of the region may take on a whole other dimension as well, adding to the level of tension between the U.S. and China, while Chinese Foreign Minister Wang Yi has not failed to criticize the United States on the question of human rights in the region; a sign of how global leadership is being reconfigured.

Finally, unlike the violent outbreaks in 2008 and 2014, the current conflict is also taking place on social media, which is useful, but is also likely to light a powder keg. This is especially so because this recent episode is a layer in the sedimentation of several profound crises of leadership. For the Israelis, after four elections in two years, the prime minister is ensuring his survival with the crisis, while he remains on the verge of being tried for corruption. As for the West Bank, Mahmoud Abbas has once again postponed necessary elections after 16 years in power. Hamas is exploiting this situation in the Gaza Strip, and becoming increasingly less popular, so it is also ready to base its survival on rubble.

Seen from afar, the maps turn these torn spaces into homogeneous zones, both territorially and politically. Nothing could be further from the truth. Not all Israelis are Jewish, not all Jews are Zionists, not all Palestinians support the violence. It is a complex place, the culmination of thousands of years of history. Those that are suffering in this chess game are not in offices and chancelleries, but live under missiles and bombs. This is what a “transformational presidency” could serve as a reminder for.