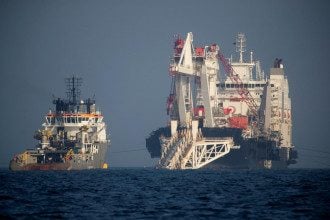 Even if the U.S. imposes sanctions on Nord Stream 2, Russia will complete its construction anyway. It is just going to be slower.

The U.S. sanctions waiver against the operator of Nord Stream 2 is primarily a concession to Germany. Certainly, Russia, as one of the beneficiaries of the project, will also benefit from the waiver, but the rationale for this decision correlates directly with Germany.

The only way to stop Nord Stream 2 at this stage, when it is 95% complete, would be to impose sanctions not only on the ships or the Russian project company behind Nord Stream 2, but also on its partners in Germany itself. But that would be a dangerous step, as it would damage relations between the United States and Germany.

At the same time, the U.S. has some time remaining until the end of the year to finalize a compromise with Germany and give it time to figure out how to complete the pipeline construction (because it could happen just by the end of this year or the beginning of next year).

Actually, such a decision was expected. It was obvious that Biden was not sure whether it was necessary to “kill” the pipeline by sacrificing relations with Germany (taking into account that the relationships with allies in Europe have become one of the pillars of his foreign policy). Moreover, he was uncertain about doing so toward the end of the Angela Merkel era, a chancellor for whom Nord Stream has essentially become a brainchild.

For Ukraine, it is good news in a certain sense because we finally see that it is impossible to delay dealing with an issue for a long time and then solve it at an extremely fast pace, like one extinguishes a fire, using naive arguments and hoping for luck. But it doesn’t work that way. Either we have to deal with the problem from the very beginning, or we need to set forth our position more clearly and base it on the principles of basic diplomacy. We need to seek alternative ways from the very beginning to reconsider our energy security, for example, something that we have not done for a very long time.

If it is completed, the pipeline may dispel the myth that Biden will defend the position that resonates with Ukraine with all his might. That, indeed, is not going to happen, because Biden will abide by American interests, especially if the U.S. notices that compromise with Germany is more beneficial to the U.S. than is confrontation in favor of Ukrainian interests.

In this case, Vladimir Putin essentially got what he wanted. If Nord Stream 2 is completed, the situation will be more than favorable for Russia.

Moreover, Russia itself has long understood the complexity of relations between the United States and Germany and predicted this compromise several months ago.

Since the issue of sanctions is the prerogative of the U.S. president, it is largely up to him to impose them. Congress, of course, can impose new sanctions, but it is quite a complicated procedure, because no one knows whether there will be votes for it or not. It is also complicated because, although the Republicans criticize Biden and consider this a weakness and a concession to Russia, it is only part of the Republicans’ political bravado. On the other hand, the mechanism for imposing sanctions is a rather manual and flexible process, and so the president can impose them at any moment. In fact, doing so is supposed to reassure his critics.

The issue of Nord Stream 2 is likely to be linked to the issue of Ukraine’s security and to assurances that gas supplies will transit through the Ukrainian GTS, issues raised during negotiations between Biden and Putin. This is even more likely as it has already been discussed. The Biden administration has already said that it s ready to discuss the issue of providing further assurances.

However, there is a risk that Russia will not compromise, since it has a stronger negotiating position on Nord Stream 2.

If the construction of the pipeline had just started or were only half-completed, it would have been easier for the United States to talk to Russia and threaten to shut the project down. But now, when it is almost completely finished and a great deal of money has been invested in it, Germany and a number of major European energy companies are sticking up for it. Therefore, even if sanctions are imposed, there is an assumption that Russia will complete Nord Stream 2 anyway, it just may take longer.

Consequently, Russia has not yet been backed into a corner and can bargain. And all the more so, it will not agree to provide any legal guarantees or sign any agreements. There may only be certain oral understandings, after which the issue of Nord Stream 2 NSP2 will be hushed up altogether.

The author, Iliia Kusa, is an expert on international policy and the Middle East at the Ukrainian Institute of the Future.