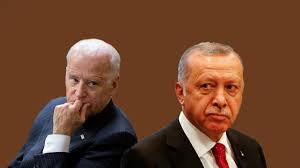 On a live broadcast of TRT, Recep Tayyip Erdogan said, “The NATO alliance should continue on firm footing. Macron talks about NATO being brain dead. [France] is also one of the NATO member states. NATO needs to take this into account.”

It is a bizarre situation when Erdogan questions Emmanuel Macron’s commitment to NATO, and says that “NATO should hold Macron accountable.” You would think that it is Macron, not Erdogan, being targeted in a NATO exercise!

Even if Turkey has faced off with France on quite a number of issues, from Libya to the eastern Mediterranean, it is extremely unfortunate for our country that Erdogan is targeting Macron in this way — that is, participating in NATO rather than siding with Macron.

At the same time, Secretary of State Antony Blinken said in a meeting of NATO foreign ministers, “We are reaffirming our commitment to NATO.”

On June 14, both Blinken’s confirmation and Erdogan’s greater commitment to NATO than Macron’s are going to be targeted.

Erdogan is preparing for a meeting he will conduct with Blinken during a NATO summit set to begin June 14. Both Erdogan’s frequent calls to turn a new page with the U.S., and his assertion that his meeting with Joe Biden will be harbingers of a new era, show how much Erdogan is relying on June 14.

However, it seems that the government’s messages to Biden are more than empty talk. For example, Bloomberg News reported that Turkey was sending Russian technicians to send a signal to Biden. As another example, Ankara has submitted a new request to Washington for S-400s. Foreign Minister Mevlut Cavusoglu explained this in a statement to reporters at an Athens breakfast: “We have already conveyed to Blinken in Brussels about how we will work out our requests for inclusion in the S-400 program. We submitted a white paper on the subject.”

We will see how the NATO summit influences relations between Erdogan’s ruling Justice and Development Party and the U.S. The NATO summit is extremely important, however, because of the NATO 2030 concept that will be ratified. In the words of NATO Secretary-General Jens Stoltenberg, NATO’s 2010 strategic concept is being renewed as 2030 on the grounds that “it does not take the strengthening of China into account nor worsening relations with Russia.”**

For this reason, the U.S. faces being locked into reviving the alliance at the June 14 summit, an objective it is seeking, first to strengthen NATO-EU cooperation, and second to enhance its cooperation with the NATO quartet of Australia, New Zealand, Japan and South Korea.

On the other hand, both Biden and Erdogan see NATO as foundational, and view the June 14 summit as an opportunity to rescue Turkish-American relations.

Here is the picture regarding the U.S.: The White House hopes that Turkey, a NATO member, will limit its cooperation with Russia, given that NATO’s new conceptual targets are China and Russia.

Here is the picture for Turkey’s ruling party, the AKP: Because of Turkey’s NATO membership and importance within NATO, the White Palace hopes that Turkish-American and Turkish-EU relations will not get any worse, and will start to improve.

If we consider what is reverberating from the Onal-Sherman meetings in Ankara and the Cavusoglu-Blinken meetings in Brussels, Ankara and Washington have reached an agreement on the intention to create new areas of cooperation by bracketing problems in Turkish-American relations.

Do the Problems Fit into Brackets?

However, this agreement does not change a fact that I emphasized last week in my column: opening a new page between Biden’s U.S. and Erdogan does not mean that we can turn an “actual” new page with respect to the U.S. and Turkey.

That is because, beginning with the U.S. support of terrorism, almost every problem is strategic, and there is no possible solution for Turkey to these issues without radical policy changes by the U.S.*

In short, the problems that exist in the relationship between Turkey and the U.S. are of a such magnitude that they cannot be placed in brackets.

*Translator’s note: By “terrorism,” the author is believed to be referring to U.S. support of Kurdish groups in northern Syria.