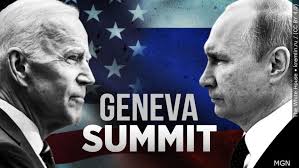 America wants to defend democracy; Russia, its sphere of influence. Ukraine will become a field of confrontation that will show who won.

The greatest leaders waited for Vladimir Putin. He was even an hour late for his audience with Pope Francis. This time, however, he was the one who had to wait. The Aurus Senat limo imported from Moscow, as big as the “beast” that American presidents use, drove up to the 18th-century La Grange villa by Lake Geneva at 1:07 p.m., 16 minutes before Joe Biden.

“It is always better to meet face to face,” the American president said encouragingly.

“I hope that the meeting will be productive,” responded Putin.

However, the spell was broken when a Bloomberg journalist yelled out a question directed at the Russian leader, asking him why he was so afraid of Alexei Navalny. While the Russian president kept a straight face, Biden could not help but smile broadly.

Rules Not for Putin

The meeting started with a two-hour conversation between the two leaders, and included each country’s top diplomat and translators. Then, Putin and Biden were joined by a broader group of advisers. After just one hour, U.S. Secretary of State Antony Blinken tweeted his thoughts on the importance of human rights — not a particularly encouraging signal for the Kremlin. “It is not going to be a historical summit. Too many issues have transpired,” said Putin’s spokesman Dmitry Peskov, as he tamped down Russian expectations.

A similar mood prevailed on the American side. Biden is the fifth president Putin has met. However, Biden is the first president with no illusions about the Moscow regime. So the president flew to Geneva, not hoping for a “reset” or “breakthrough,” but to establish basic rules and indicate areas where the two could find common ground.

But even this minimum plan seems overly ambitious. At a press conference following four hours of talks, Putin did not indicate any area where he was willing to compromise. He did not make any promises regarding cyberattacks. Navalny’s release seems completely unattainable, and the Ukrainian crisis can only be solved based on the agreement from Minsk, which has been at a standstill for years. Putin blamed Americans for the deterioration of relations with Russia, stating that Americans are themselves guilty of the things they accuse the Russians of. Even the arms control negotiations will be subject to further discussion.

“In the U.S., you can hardly open your mouth before being shot dead. In our countries, whatever happens is the responsibility of the state leadership,” Putin said, adding that during his talk with Biden, the American president raised the issue of human rights. “People die on the streets of America. You can hardly open your mouth, and you can get shot,” Putin continued.

To avoid the embarrassing spectacle of Helsinki in 2018, when Donald Trump denied CIA allegations about the Kremlin’s interference in American elections, Biden rejected the idea of a joint press conference with Putin.

Putin does not want to enter into any deals with America because the summit itself proves that it is not profitable for him. In fact, Biden had proposed meeting in March, when the world was horrified by the concentration of Russian troops near the Ukrainian border. For the Russian president, who stands as leader of a country with an economy 14 times smaller than America’s economy, the appearance of being at an equal level with the U.S. is already a great accomplishment. But apparently it is not enough, since Russia still has not abandoned its rogue politics in the two months since the invitation to the summit. A cyberattack, probably executed from its territory, paralyzed an oil pipeline on the East Coast of the U.S. Moreover, the Kremlin supported the Belarussian hijacking of a Ryanair plane and the brutal treatment of Navalny.

“Defending human rights, that’s just part of the DNA of our country. Unlike other countries, including Russia, we’re uniquely a product of an idea. We possess them [human rights] because we’re born — period. And so, at the forum, I pointed out to him [Putin] that that’s why we’re going raise our concerns about cases like Alexei Navalny,” stated the American president.

“I answered honestly,” Biden said, before leaving Geneva when asked if he maintains that Putin is a “murderer.” During a closed NATO meeting in Brussels, he said that his main goal would be “the consolidation of the Democratic Party against the Russian and Chinese authoritarianism.”

The principal battleground for America and Russia will be Ukraine. Each side has a powerful weapon; Putin still holds an army of 90,000 troops on the Ukrainian border and is ready to strike at any moment. Biden, in turn, has the option of admitting Ukraine into NATO. He noted, however, that admission depends on the reforms made by Kyiv and on persuading the other allies (especially France and Germany). He also stated that Russia’s occupation of Donbass and Crimea is not an obstacle to expanding the alliance. (Theoretically, the purpose of the alliance is to resolve the boundary disputes.)

Further, Biden claimed that America would defend the independence and territorial integrity of Ukraine. Russia’s agreement to include the U.S. in the Normandy Format that is negotiating the peace in Ukraine would have been a first sign of any compromise between the two powers. It is highly doubtful, however, that the Kremlin will agree to this.

Biden had announced that at the meeting with Putin, he would draw “red lines,” which would provoke a “symmetrical” response from America if Russia crossed them. One of those red lines is undoubtedly related to Ukraine, but where the other lines run is unknown.

The American president wants to find areas of cooperation, primarily regarding nuclear weapons. Putin remembers how the arms race imposed by Ronald Reagan led to the collapse of the Soviet Union, which for him was “the greatest tragedy of the 20th century.” This is why he might want to make certain concessions. Biden, in turn, wants to free himself from this clash to focus on the things most important to him: rebuilding the American economy and the confrontation with China. Russia has gained an advantage over the U.S. in certain weapons, such as submarines and high-speed missiles. The development of artificial intelligence may divert the arms race in an unknown direction, and competition in this area would therefore require a large investment by America.

But the risk of failure is high here as well. Biden surprised Moscow at the outset by extending the agreement on reducing high-range missiles (New START) by five years instead of forcing the Russians to compromise on the tactical nuclear missiles most dangerous for Europe. The question is the extent to which Moscow will take advantage of that extension.

Iran and the Hackers

America is also counting on Russian cooperation in a delicate operation to withdraw its troops from Afghanistan and strike a deal with Iran regarding the suspension of nuclear weapons. Admittedly, Tehran has turned out to be a valuable ally for Putin in defending the Syrian regime. But the excessive power of Iran, which borders Russia, may be dangerous for Moscow. Putin himself pointed to Syria, Libya and climate change as possible areas of cooperation.

On the other hand, the agreement to cease cyberattacks is less likely. Russia has been successful in this effort without suffering any tangible consequences so far.

Putin holds some valuable cards as well. Under pressure from Germany, Biden’s consent to finish Nord Stream 2 shows that America did not succeed in building a compact camp of Western democracies. Conversely, the sanctions on Russia maintained by the U.S. and EU for seven years have contributed to the collapse of the Russian economy. Except for China, no one from abroad chooses to make serious investments in Russia. Moreover, there is growing dissatisfaction with Putin’s regime, which promised to provide a higher standard of living in exchange for limiting democracy. Still, it has not yet been able to do so. According to the Levada Center, 53% of young Russians want to leave the country.* If Biden chooses to impose even more restrictions, the system built by Putin could collapse.

*Editor’s note: The Levada Center is a Russian independent nongovernmental polling and sociological research organization recognized as a foreign agent under the 2012 Russian foreign agent law.