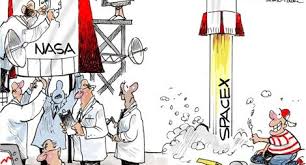 An era in which outer space may be used for commercial purposes is in sight. Two American space travel companies have succeeded, one after the other, in manned flights to space.

American and British businessmen, who have already expanded their companies globally, have been independently developing spacecraft with the goal of advancing an industry of space travel.

More than 60 years ago, Soviet cosmonaut Yuri Gagarin was the first of mankind to succeed in manned space travel. Outer space activities initiated by the state have rapidly moved to the private sector. It can be said that the realization of space travel represents an era of change as well as the progress of science and technology.

The capsule that carried Jeff Bezos took a parabolic flight, reaching an altitude of 80-100 kilometers (50-62 miles) before returning to Earth. The technology used for the capsule could also be applied to other forms of aircraft travel that are not as overwhelmingly fast because they encounter little air resistance. Astronaut Soichi Noguchi believes that the space business will “accelerate immediately.”

There are some things to be considered. One is the high cost of embarking on space travel. It is said that more than 600 people, including some Japanese, have made reservations for about 28 million yen (approximately $250,000) with the American company Virgin Galactic, which is looking into space tourism starting next year.

Although there is a possibility that space travel could become cheaper by reusing the frame of a spacecraft, it is not at a level that is generally accessible. Criticism for the privileged amusements of the wealthy may arise because of this. There are concerns that, if an industry in space travel is established and competition progresses, the increase in launches could lead to accidents and have an impact on the atmosphere. It is essential that we predetermine the rules regarding safety and compensation in these instances.

Private space travel in the United States will be preceded by SpaceX, founded by Elon Musk of the sizeable electric car company Tesla. SpaceX is already operating a spacecraft called Crew Dragon to carry pilots to the International Space Station. This fall, the SpaceX crew plans to orbit the globe for several days and to then stay on the International Space Station until next year.

Furthermore, outer space is becoming a battleground for hegemony between the United States, China and Russia. I would like to consider what the ideal state of a fair and safe universe that includes the involvement of the private sector, based on the Outer Space Treaty,* would look like.

After taking a shuttle to space himself and experiencing a few minutes of weightlessness, Bezos, founder of the major e-commerce business Amazon, said of the Earth’s atmosphere, “[I]t’s so thin and fragile looking.”

Why is he only gazing at the world from the outside? I would like for these billionaires that have pursued their dreams to go to space to ask themselves if this privilege is accompanied by a responsibility to extend the technological momentum to protecting the Earth’s environment.

*Editor’s note: The Outer Space Treaty refers to the Treaty on Principles of Governing the Activities of States in the Exploration and Use of Outer Space, including the Moon and Other Celestial Bodies, which took effect in 1967 and provides the basic framework of international space law.