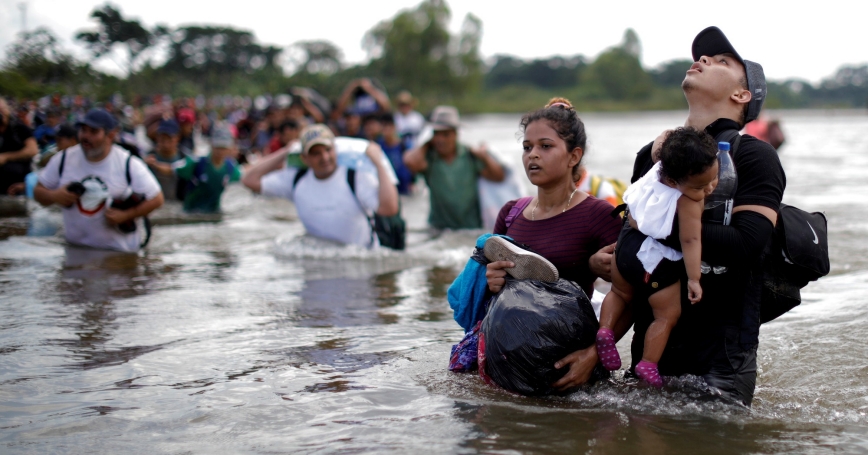 The United States cannot address the causes of immigration while its allies are corrupt regimes that constantly undermine democracy and avoid accountability at all costs.

President Joe Biden promised in his campaign that he would invest $4 billion to face the recurring migration crises. Once he took office, he entrusted Vice President Kamala Harris with the handling of this problem, following the guidelines of former President Barack Obama, who, back in the day, entrusted then-Vice President Biden with the same task. This pattern shows the importance that immigration has on the administration’s agenda, but at the same time it frees the president from his probable — or maybe expected — failure.

As part of this initiative, Harris visited Guatemala and Mexico, where she met the respective presidents, Alejandro Giammattei and Andrés Manuel López Obrador, and also traveled to the city of El Paso, Texas, where she met with immigration authorities, representatives of nongovernmental organizations and illegal immigrants. Harris’ message had two components: On the one hand, she explicitly warned Central Americans not to “enter the United States illegally” because they will be deported; on the other, she promised to “tackle the root causes” of the problem in the countries of origin themselves, through economic investment and support for democratic institutions that encourage the population to remain in their countries by promoting employment and safety.

Harris’ warning is a political gesture without any effect on the thousands of Central Americans willing to risk their lives on the journey north. Even in the toughest moments of the Trump Administration the exodus did not stop. For those who are desperate and determined to flee the extreme conditions of poverty, corruption and violence that plague Central American societies, the threat of deportation of Republicans or Democrats does not mean much. We just have to remember that, in these countries, former President Obama is known as “the Deporter-in-Chief,” and that this perception has been confirmed by data from the Pew Research Center, according to which Trump did not reach the number of deportations carried out by Obama. The exodus, therefore, will go on.

The second component of Harris’ message, attacking the “root causes” of the problem, does not seem to promise a better fate. The political and economic elites of the three countries (Guatemala, El Salvador and Honduras), from which most people flee to the U.S., have such a level of corruption that it is unthinkable that a million-dollar investment would improve living conditions; and the dismantling of democratic institutions goes hand-in-hand with corruption.

In Guatemala, President Giammattei, who was imprisoned for the extrajudicial murder of seven inmates when he was director of the prison system in 2006, has surrounded himself with shadowy military and business groups investigated by the now defunct Commission against Impunity in Guatemala formed by the United Nations. At least three prosecutors of these groups who investigated corruption cases have been forced into exile. The situation in Honduras is more dramatic: The U.S. has as its counterpart a government whose president, Juan Orlando Hernández, has been accused by a federal court in New York of being involved in drug trafficking (his brother, Tony, was sentenced to life imprisonment by that same court and for the same charges).

The case of El Salvador deserves special attention for its peculiarity. President Nayib Bukele — with the support and even enthusiasm of the majority of voters — has dismantled the Salvadoran democratic system, which was the negotiated culmination of a 10-year civil war that cost 100,000 lives. Thirty years of democracy were ruined in an instant. Bukele has ended the separation of powers, he harasses opponents and the press, and now he intends to hold a referendum to change the Constitution and be able to re-elect himself at will, just as Hugo Chávez did in Venezuela and Daniel Ortega in Nicaragua, but without the leftist ideological display. Bukele took the liberty (called “rudeness” by the U.S. press) of not receiving the special envoy from the Biden administration for Central America, Ricardo Zúñiga. As a result, Washington has suspended military and police support to El Salvador.

It would be delusional to think, then, that the Biden administration will be able to attack the “root causes” of the problem of illegal immigration of Central Americans, when the three governments — elected or re-elected under Trump’s influence — are constantly undermining democracy and avoiding any accountability. Vice President Harris has said that, to overcome government corruption, the economic investment will be given directly to the population through nongovernmental organizations.

This initiative has two weak points. The tendency of authoritarian or dictatorial governments to legislate against NGOs in order to declare them “enemies” of the nation and close them down is widespread in our time (Russia, Hungary, Belarus, Venezuela, to mention a few). In Central America itself, Ortega’s regime has attacked organizations that promote human rights, freedom of the press and culture, and has not only closed them down, but also imprisoned their managers or put them in exile ( journalist Carlos Fernando Chamorro being the most representative example). It is no surprise, then, that Bukele and his fellow men — the Northern Triangle — soon joined forces against these organizations as part of their authoritarian onslaught.

The other weak point has to do with the supervision of the delivery of the eventual millions in funds to Central American NGOs. For this job, the State Department turns to the hiring of American contractor companies. This has been criticized by experts in the field, since in this type of model more than half of the money gets lost in the process and ends up returning to the U.S, due to the high salaries and operating costs of contractor companies.

Stated bluntly, the problem of the illegal immigration of Central Americans to the United States has no solution in the short or medium term. Vice President Harris’ possibilities are very limited, more than those of Biden when he took office from then-President Obama, since the democratic deterioration was not as acute as it is now.

About Sergio Ferreras 22 Articles
Hi! My name is Sergio and I come from Spain. I am new here, but eager to start contributing and learning from the great people at Watching America!