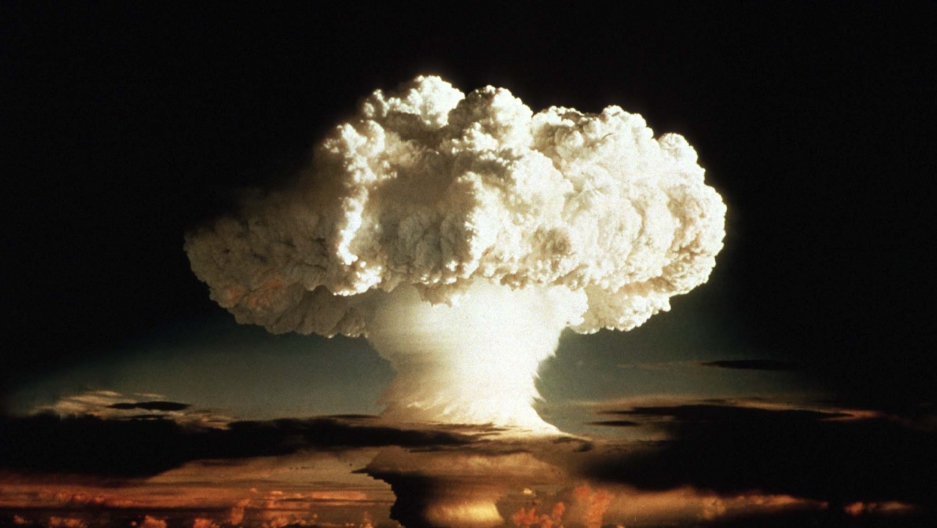 With the struggle for supremacy between the United States and China at the forefront, conflicts between nations in Europe, Asia and the Middle East are heating up, increasing the possibility of nuclear war.

At the same time, a trend is gaining momentum toward a “world without nuclear weapons” that transcends national boundaries and sees the value in cooperation.

When we think about the devastation of the atomic bombing of Hiroshima 76 years ago today, the path we should choose is clear. We will not allow the mistakes of humanity to be repeated again. Japan must stand at the forefront of this pledge and take action.

Competition among Great Powers Can Be Perilous

Four years before the 1962 Cuban Missile Crisis, which froze the world, Japan was on the verge of becoming a nuclear battlefield. Recently, classified U.S. documents describing this process have come to light.

It was nine years after the establishment of the People’s Republic of China, when China shelled Kinmen Island in Taiwan. The U.S. considered a nuclear attack on a Chinese military base, saying that “If the situation worsens, we will have no choice but to launch a nuclear attack deep inside China, and the Soviet Union may retaliate with nuclear weapons against Okinawa, but we must accept the consequences.”*

In the end, the president’s decision prevented an attack, but the fact that there was a theory of war under a U.S. administration that did not hesitate to sacrifice Okinawa is a source of horror.

More than 60 years have passed since then; the situation surrounding nuclear weapons has become more complicated.

In addition to the U.S. and Russia, China now possesses nuclear weapons, and the trend toward military expansion has intensified. On the other hand, the economies of Japan, the United States, China and Taiwan are now closely intertwined, and there is no simple structure of confrontation.

However, if we reflect on the lessons of history, where many wars were born out of petty friction, misunderstandings and overconfidence, the danger remains the same.

In the midst of this tension, Japan and the United States recognized Taiwan in their joint statement at this year’s summit. This is the first time this has been done since Japan normalized diplomatic relations with China.

The Japanese government has changed its interpretation of the Constitution to allow Japan to exercise its right to collective self-defense, albeit on a limited basis. If there is an emergency in Taiwan, the U.S. will probably ask Japan to get involved.

There Is No Winner in Nuclear War

Within the U.S., there is even talk of deploying intermediate-range ballistic missiles in Japan in order to increase deterrence against China.

How should Japan maintain its distance from the struggle for power among the major world powers and still build a rules-based order? Without such a proactive vision, Japan has thrown itself into the vortex. Unfortunately, this is the state of Japan today.

As the U.S. retreats, the trust in the nuclear umbrella will weaken, and this could set off a chain of events in which allied nations become armed with nuclear weapons. Such concerns are also being discussed around the world. Scientists have warned that the doomsday clock for the destruction of the earth has stopped at 100 seconds away from the worst-case scenario.

In the midst of this situation, the summit of the two nuclear powers, the U.S. and Russia, produced a noteworthy statement in June: “There is no winner in nuclear war, and it must never be fought.”*

This was a reprise of the pledge made by President Ronald Reagan and Russian General Secretary Mikhail Gorbachev in 1985.

Hopefully this is a sign of growing responsibility and pride toward maintaining reason and a sense of urgency despite the constant quarreling.

The nuclear powers, including the U.S. and Russia, have turned their backs on their obligations to negotiate disarmament under the Nuclear Non-Proliferation Treaty. At the same time, their selfish attitude of not allowing emerging nations to develop nuclear weapons has eroded the morality of arms control.

After the statement, the U.S. and Russia began holding high-level talks. Using this as a starting point, a new framework for negotiations should be established, involving China as well. I hope that President Joe Biden will realize the need for a declaration of no first use of nuclear weapons, and thus create momentum for dialogue with China.

When the Obama administration considered the declaration, the Japanese government opposed it, saying it would “weaken deterrence.”

Engage in the Nuclear Non-Proliferation Treaty

Shouldn’t Japan’s role be to serve as a catalyst for dialogue between the U.S. and China, taking advantage of its alliance with the U.S. and its historical ties with China? Japan should develop a long-term roadmap for a comprehensive Northeast Asia Nuclear Weapon Free Zone that includes the North Korean nuclear issue.

If the major powers do not act, the non-nuclear weapon states and international public opinion will turn the wheel for abolishing nuclear weapons. This year, the Nuclear Weapons Convention, which brings together the aspirations of the world’s nuclear powers, took effect.

The nuclear weapon states, which adhere to the Non-Proliferation Treaty, have rejected the Nuclear Weapons Convention, and Japan did the same. However, the two treaties are complementary in their pursuit of the same goal of abolishing nuclear weapons, according to Izumi Nakamitsu, Under-Secretary-General of Disarmament Affairs at the United Nations.

Next year, the first meeting of the Conference of the Parties to the Nuclear Non-Proliferation Treaty will be held. The A-bomb survivors of Hiroshima and Nagasaki, victims of nuclear tests, representatives of various countries, nongovernmental organizations and others will gather there. If there is no representative of the government of the only country to have experienced nuclear war at the conference, history will be deeply disserved.

The work of fleshing out the Nuclear Non-Proliferation Treaty is just beginning. Involvement in the creation of rules for the abolition of nuclear weapons should be of vital importance to Japan, which is under constant threat from North Korea.

Japan’s lessons and knowledge can also be used to support the victims of nuclear tests and promote environmental restoration. First, Japan should participate as an observer and show solidarity with the international community.