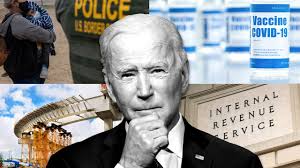 Can the new president really change America? Since his election, Joe Biden has astonished people with the audacity of his announcements, but the world is still asking if he can change America. Since the inauguration on Jan. 20, 2021, he has been off to a flying start taking unprecedented measures not seen in the history of the United States. But the Senate is stalling this change of direction. In particular, the president is struggling to save his $4 trillion stimulus plan. An assessment of the six months of Biden’s presidency with Christopher Deroubaix, principal reporter at l’Humanité, and a specialist on the United States.

He got off to a flying start. Barely settled into the Oval Office, “Sleepy Joe,” a name that Donald Trump saddled him with, showed unexpected political vigor. One only needs to look at his proposals since the election:

¥ A doubling of the minimum wage to $15 per hour, which he was unsuccessful in getting passed.

¥ A recovery plan of $1.9 trillion, or nearly 10% of the U.S. gross domestic product. This was passed by Congress on March 11, and provided $1,400 to every American, and extended federal unemployment insurance of $400 per week through September 2021.

¥ A huge infrastructure investment plan (roads, bridges, electric and digital networks), potentially totaling $4 trillion over 10 years, financed in part by an increase in corporate taxes and an increased tax rate for the richest households.

¥ A global minimum corporate tax on multinational companies of 21%, ultimately reduced to 15% after a compromise passed at the Group of Twenty summit.

One can add to the list the 17 presidential executive orders signed since his taking office:

¥ The return of the United States to the Paris Agreement and to the World Health Organization.

¥ The end of the “Muslim ban” that barred citizens of several Muslim countries from entering America.

¥ The abandonment of the construction of the border wall with Mexico.

The Former Champion of Ultra-Repressive Policies

For anyone who recalls Biden’s political career, this list is dizzying. From the time he was elected to the Senate, he has always been a moderate, a centrist, inclined to compromise with Republicans and with prevailing ideas. In the 1970s, he voted for the Hyde Amendment, which prohibited federal financing for abortion, recognized as a constitutional right since a Supreme Court decision in 1973.

In the 1980s, he wholeheartedly voted for Ronald Reagan’s massive tax cuts. During the following decade, he made himself the champion of ultra-repressive policies by drafting a 1994 criminal law signed by Bill Clinton, which sparked a steep increase in the prison population.

Thus, one can legitimately wonder what happened to Biden. John Mason has a hypothesis. The professor of political science at William Patterson University in New Jersey puts it in the following terms: “If Joe Biden is a centrist, that means that he follows the center of gravity of his party. When that shifts to the left, he follows.”* The Marxist magazine Jacobin said nearly the same thing when it ran the following article in January 2021: “If Joe Biden Moves Left, You Can Thank the Left.”

Biden’s new political positioning thus corresponds to a central, major evolution in American political life: the shift to the left of Democratic voters, a phenomenon that has doubtless been rendered barely visible, or even invisible, by the shift to the right of Republican voters, embodied by Donald Trump and Trumpism. These two combined evolutions translate into the most striking phenomenon of the period in the United States: polarization. It is political, ideological, sociological and geographic.

A Project Borne by a New Generation

As for the evolution on the left, it can be said that it really accelerated during the Barack Obama administration under a president who generated disappointment and frustration. Beginning in 2010, social movements won an audience and gained ground while inequality — social, racial and class — continued to increase. Bernie Sanders’ campaign during the 2016 Democratic presidential primary catalyzed these demands and mobilizations and made a political project of them.

This project is, in particular, borne by the new generation. Known as millennials, they were born between 1981 and 1996 and are thus between 25 and 40 years old today. They are the driving force behind the renewal of the struggle for civil rights, the Black Lives Matter movement, a new page of feminism, the #MeToo movement, the return of the trade union movement, the powerful movement for a decent minimum wage at $15 per hour, as well as the emergence of the new great modern issue: climate change. Biden learned something from the political life, and doubtless still more from Obama’s time in office: If one does not govern with one’s social and political base, one is reduced to powerlessness.