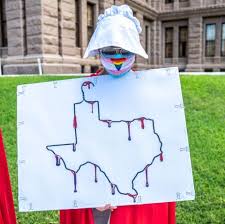 In Texas, the vast majority of abortions are now illegal, even in the case of incest or rape, after a law took effect Wednesday forbidding abortions as soon as a fetal heartbeat can be detected. This normally happens around the sixth week of pregnancy, when many women are still unaware that they are pregnant. This law has been deemed unconstitutional, notably by Joe Biden himself, although the Supreme Court has failed to block it in response to an emergency appeal.

A law banning all abortions after six weeks of pregnancy and permitting private citizens to take legal action against transgressors became law in Texas on Wednesday, Sept. 1, after the Supreme Court failed to issue an emergency stay. President Joe Biden denounced the law as violating the Constitution.

With the passing of Texas Senate Bill 8, nicknamed the “Texas Heartbeat Act,” the vast majority of abortions (85% according to opponents to the bill) are now illegal in this conservative Southern state, even in cases of incest or rape.

All abortions are now banned from the moment a fetal heartbeat has been detected, at a stage of pregnancy when many women are still unaware that they are expecting. The only remaining possibility for an abortion is in the case of an extreme medical emergency.

Should the law stand, it will dramatically limit access to abortions in Texas where, according to family planning associations, more than 85% of women have an abortion after six weeks of pregnancy.

In the United States, abortion is legal until the fetus becomes viable, normally between 22 and 24 weeks of pregnancy. This fundamental right is guaranteed by the Constitution on the basis of two Supreme Court decisions.

The most important one was the 1973 case of Roe v. Wade, which found that abortion was protected by a federal right to privacy guaranteed under the 14th Amendment.

The second landmark decision with respect to abortion was the 1992 case of Planned Parenthood v. Casey, which legalized abortion as long as the fetus is not yet viable, usually until the 22nd to 24th week of pregnancy.

Texas Senate Bill 8 is thus “massively unconstitutional,” Maître Christophe Fabre, an attorney in the Paris courts and professor at the Paris Institute of Political Studies, told France 24. “This law goes against U.S. federal law on abortion. The time limit is below the 22 to 24 weeks set by the Roe and Casey precedents,” said the constitutional scholar, noting that federal law preempts state law in this case.

It is not the first time that a U.S. state has defied federal law to pass an anti-abortion bill. Before Texas, at least 12 other states, including most recently Alabama and Mississippi, have voted on bills prohibiting abortions as soon as a heartbeat has been detected. So far, even though some matters are still pending, the federal courts have dismissed most of these laws.

Any Citizen Can Sue

So how is Texas Senate Bill 8 any different? With this law, Texas has found a way to slip through the constitutional net by wording its bill differently.

This time, it is not the state that will enforce the law in question, but private citizens who can sue associations, organizations or anyone found “aiding and abetting” a woman in obtaining an abortion.

In other words, any American citizen, from any state in the country, can now sue doctors or anyone who has helped a woman get an abortion in Texas after her sixth week of pregnancy, regardless of whether they know the patient or not, or whether they provided medical help or any other assistance. As The New York Times points out, this law could lead to grotesque situations where an Uber driver could be sued for driving a woman to an abortion clinic.

In this way, Texas has managed to evade the Constitution. “The Texas lawmakers are cunning,” Fabre continued. “They deny all responsibility, and yet it was the Texas legislature that passed this bill violating federal law,” he explained.

“Moreover, it creates a procedural issue,” Fabre added, referring to court proceedings which could ensue. “It makes a provision for what we call a ‘citizen suit,’ whereby any citizen can take legal action. This is not only against Texas law but also against Article 3 of the U.S. Constitution, which lays down ‘procedural requirements,’ namely that one must prove their stake in the act, prove that they are a victim, before suing someone before a court,” Fabre explains.

“For that matter, more than 370 Texas lawyers have asserted in an open letter that the Texas bill is legally dubious,” he pointed out.

“This is practically a law of intimidation,” Fabre continued. “Texas lawmakers are trying to create additional difficulties to dissuade women, doctors and helpers from pursuing abortions, for instance by forcing them to incur legal fees when lawsuits are filed.” Indeed, the bill provides that private citizens who sue under this law are entitled to $10,000 in “statutory damages” if they win their case, a sum that will come out of the defendant’s pocket.

The purpose here is to make these suits as costly and onerous as possible for those who may end up in the dock, because they will be forced to pay for their own legal fees even if they prevail, according to The Washington Post, and they may even have to face more than one lawsuit for a single abortion.

Silence from the Supreme Court

The cunning Texas bill was drafted in a way that makes it difficult to challenge in federal court. A lawsuit aiming to block a bill on the grounds that it may be unconstitutional usually holds the state’s representatives responsible. Texas Senate Bill 8, however, puts all responsibility in the hands of private citizens, thus rendering the federal courts powerless.

Several pro-abortion rights advocacy organizations filed an emergency appeal with the Supreme Court on Aug. 30, asking it to block the implementation of the bill or to force federal courts to do so.

The country’s highest court, which was supposed to rule on the matter by Sept. 1, declined to grant the emergency request for a stay. “A decision could be made any day now, or never at all,” Fabre explained, adding that in the absence of a decision by the Supreme Court, the authorities in Texas “would like this bill to be brought before Texas jurisdictions, which are more likely to endorse it, since the judges, elected by the local population, are much more conservative there.”

An Anti-Abortion Offensive from Conservatives

The draft bill, signed in May by Texas Gov. Greg Abbott, is part of a wider offensive led by conservative states against abortion rights.

Mississippi is currently defending a bill passed in 2018 that bans most abortions after the 15th week of pregnancy.

“Texas and Mississippi are passing these types of bills because they are hoping the Supreme Court will change its jurisprudence on abortion rights,” Fabre added. “There is a political drive from conservative states to bring those anti-abortion bills before the Supreme Court so that it overrules the precedents set by the Roe and Casey cases, two pillars of abortion rights legislation.”

According to Fabre, the presence of a strong conservative majority in the Supreme Court suggests this may happen. “The chances that the Supreme Court invalidates existing laws on abortion rights are at an all-time high,” Fabre said.

Since the nomination and confirmation of three Supreme Court justices by former Republican President Donald Trump, the six conservative justices on the nine-member court now hold the majority on America’s highest court.

While Chief Justice John Roberts has so far insisted on upholding the rule of precedent — the doctrine under which courts are required to uphold previous judicial rulings on the same issue — a number of judges on the court are speaking openly against laws guaranteeing abortion rights. “Those judges are Samuel Alito, Clarence Thomas and Brett Kavanaugh,” Fabre explained. “As for Amy Coney Barrett, she has already declared that Casey and Roe are not superprecedents, which means she will not hesitate to bring them into question.”

’An Existential Threat to Abortion Rights’

The Supreme Court agreed to examine Mississippi’s restrictive bill in the fall, with a possible ruling expected next May or June. For Mary Ziegler, a professor of law at Florida State University and an abortion rights specialist, this decision is very telling. She told France 24 that she fears there is “an existential threat to abortion rights in the United States.”

“Many expect the Court to uphold the Mississippi bill. To do this, the judges will have to overrule all or part of the Roe v. Wade precedent,” Ziegler said.* Should this law guaranteeing abortion rights be rendered null and void, Ziegler explained, “half of the country’s states would criminalize abortion.”

The U.S. president, for his part, has denounced Texas Senate Bill 8 as an infringement of the Constitution. “This extreme Texas law blatantly violates the constitutional right established under Roe v. Wade,” Biden said, vowing to defend the rights of American women to access abortions.