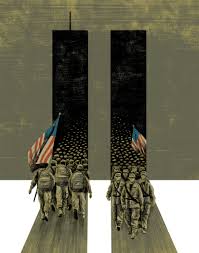 The 9/11 attacks, exactly 20 years ago, were a defining turning point in the region, after which everything changed, including policies, interests, calculations, regimes and regional balances.

Some countries were occupied and torn apart; others moved to fill the void, offering scenarios of liberation, division and the further fragmentation of what had already been fragmented. Many uprisings and revolutions were brought to a standstill due to having been hijacked or aborted entirely.

The Arab world seemed to be like one who is facing his fate in a maze without a compass as a guide, having a glimpse of hope and then losing it, taking one hit after another.

No matter how active their imagination, they had no idea what had happened on Sept. 11, 2001, nor had they thought of the consequences that might follow.

The economic, military and political symbols of the American empire were targeted by suicide planes simultaneously — the World Trade Center towers in New York and the Pentagon. The White House itself was almost hit as well.

There were mixed feelings that emerged: some sympathy for the civilian victims who died without guilt or wrongdoing, stuck under the rubble, whose voices were muffled; some feelings of schadenfreude regarding what had befallen the first superpower, which resounded throughout the Arab world.

In shock, a new American strategy crystallized, fueling the rising hatred of Washington-backed allied regimes. That was the answer to the question: “Why do they hate us?” which occurred in the aftermath of the events of Sept. 11.

Thus, the reasons for hate turned toward the Arab regimes that had relations with American administrations, and American strategies and policies were absolved of any responsibility. They were neither reviewed or modified, nor did the U.S. apologize for its mistakes in the Middle East.

The exact opposite happened. The U.S. lost control and threw caution to the wind; it occupied two states in a row — Afghanistan and Iraq — the former in the name of fighting terrorism and extremism, and the latter to remove weapons of mass destruction.

The results were more of a strategic defeat. The ideas of al-Qaida, which planned and carried out the 9/11 attacks, were not subverted, nor have its resources been depleted, despite killing its leader, Osama bin Laden. New, more militant and violent groups emerged from under the al-Qaida cloak through splintering, the most dangerous being the Islamic State. Its old ally, the Taliban, have returned to power in Afghanistan.

This was an absolute failure of U.S. strategy, which began talking in increasingly pragmatic terms about fundamental changes that have occurred in the structure of the Taliban’s ideas and attitudes, or that they will no longer be recognized as a terrorist organization.

America is not the America of 20 years ago; it is no longer the dominant superpower in the world that it was immediately after the end of the Cold War and the disintegration of the former Soviet Union. This time has come to an end. Its roles have declined, it’s lost its weight within Western alliances and its internal crises have worsened under the burden of its political and ethnic divisions.

The neoconservative right, whose ideas, notions and projects in the Middle East dominated the administration of President George W. Bush, has waned dramatically.

In the 9/11 attacks, the neoconservative right, whose pillars are described as the “princes of darkness,” found the perfect opportunity to enforce its ideas and legislation via direct military action to reengineer the maps of the Arab world through division and dislocation.

There is now a U.S. strategic shift in which Democrats and Republicans have agreed to lessen the burden of overseas military installations, especially in the Middle East, and to focus attention on East Asia, where the conflict over the future is with China.

Despite the randomness of the withdrawal from Afghanistan, it is a consistent and agreeable strategic line that can be expected to be followed by another withdrawal from Iraq.

What will happen on day the U.S. withdraws from Iraq? “The real reason [for striking Iraq] is that after 9/11 America needed to hit someone in the Arab-Muslim world,” but Iraq was easiest, Thomas Friedman wrote in The New York Times.

No weapons of mass destruction, no harboring of terrorist organizations, no liberation, no democracy — all of that was merely pretext. Dismantling Syria was a secondary goal, but it failed. Egypt was the ultimate grand prize in the end, as they said over and over, but it remained firmly anchored in its historical legacy.

What was absurd politically has met its inevitable fate. Revolutions and uprisings took place that were not destined to achieve their goals; they were hijacked at the first opportunity, or fell into the darkness of civil strife and proxy wars.

The American bet on the tide of political Islam to fill the power vacuum when its former allies were overthrown is remarkable in hindsight. That bet led to unrest and clashes in many parts of the Arab world, which feared the ghosts of the religious state.

After 20 years of false promises, aborted experiments and ethnic and sectarian skirmishes, the demand for democracy and a modern civil state continues to resonate without despair in the maze that is the Arab world.