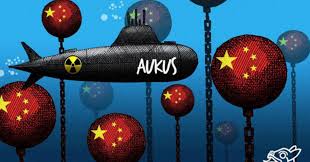 The United States, the United Kingdom and Australia have launched AUKUS, a trilateral security pact centered on the Indo-Pacific region. The announcement was followed by news that the U.S. would facilitate Australia’s possession of nuclear-powered submarines, the second time it has made such a move since it supported British nuclear programs during the Cold War. The pact will enhance Australia’s naval power, thereby limiting the growth of Chinese influence in the Indo-Pacific region, including the South China Sea.

Through AUKUS, the U.S. has established another framework for military and security cooperation against China in addition to the Quadrilateral Security Dialogue and the Five Eyes. As these networks start to carry out operations, South Korea will likely face increasing pressure from the U.S. to become a part of its strategy.

On Sept. 15, President Joe Biden, British Prime Minister Boris Johnson and Australian Prime Minister Scott Morrison held a virtual press conference where they announced the beginning of AUKUS, named after its members. The leaders of the three countries issued a joint statement, pledging their “resolve to deepen diplomatic, security, and defense cooperation in the Indo-Pacific region” based on “[their] enduring ideals and shared commitment to the international rules-based order.” According to the statement, their cooperation will be centered around “cyber capabilities, artificial intelligence, quantum technologies, and additional undersea capabilities.”

Nuclear-powered submarines use energy generated from a nuclear reactor as a power source, and are different from submarines that deploy nuclear weapons. They are state-of-the-art weapons capable of operating at a longer range and with less noise than conventional submarines; as such, only six countries — the U.S., Russia, Britain, France, China and India — possess them. Britain is the only country to which the U.S. gave provisions for nuclear-powered submarines after it became the world’s first country to possess the relevant technology. Just as it armed Britain with nuclear-powered submarines in 1958 amid the growing tensions of the Cold War, the U.S. is arming another key ally in the Pacific, Australia with the same weapons amid the growing threat of China.

The AUKUS countries have officially denied that the security pact is meant to directly challenge China. Neither the joint statement nor the press conference specifically mentioned China. Nevertheless, the prevailing view is that the U.S. intends to respond to Chinese aggression in the Indo-Pacific by forming a security partnership with Britain and Australia, two of its longest standing allies in the region.

An alternative view sees the pact as the result of an alignment of interests among the three countries. The U.S. would limit China’s growth; Britain would expand its influence in the Indo-Pacific; and Australia would acquire nuclear-powered submarines through the partnership. The U.S. in particular has established a foundation for military cooperation utilizing nuclear-powered submarines in addition to its vast network in the region, including bilateral security pacts with allies, the Quad and the Five Eyes. Biden is expected to invite Quad leaders to the White House on Sept. 24 for the Quad’s first nonvirtual summit.

China protested the launch of AUKUS, calling it a product of “Cold War” mentality. Liu Pengyu, spokesman for the Chinese Embassy in the U.S., remarked that countries “should not build exclusionary blocs targeting or harming the interests of third parties. In particular, they should shake off their Cold War mentality and ideological prejudice.” On Sept. 16, Chinese Foreign Ministry spokesman Zhao Lijian also stated that “nuclear submarine cooperation … has seriously undermined regional peace and stability, intensified the arms race and undermined international nonproliferation efforts” at a regular press briefing. “[The U.S. and Britain] prove once again that they are using nuclear exports as a tool for a geopolitical game and adopting double standards. This is extremely irresponsible,” he said.