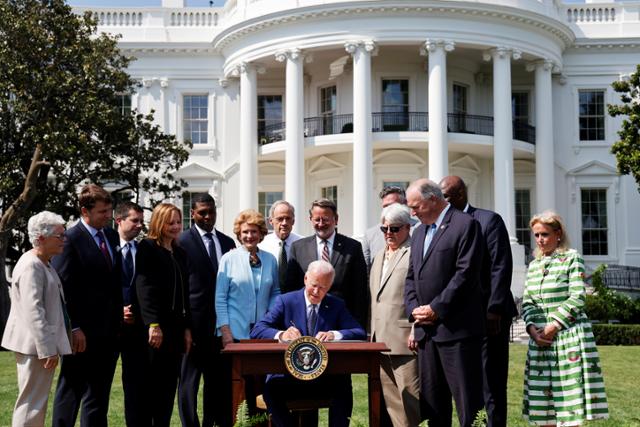 On Aug. 5, 2021, President Joe Biden signed an executive order stating that by 2030, half of the new vehicles sold in the United States will be electric. In fact, it is no exaggeration to say that the success or failure of the Biden administration’s climate change policy ultimately depends on the country’s transition to electric vehicles. Carbon reduction in the U.S. power generation sector has already achieved a lot, thanks to the situation concerning natural gas under the Trump administration. What now remains is to further convert gas power to renewable energy.

The U.S. energy transition has not been particularly successful in the automotive sector. The reason is that automobiles and oil have been sources of power that have supported the United States both politically and economically for the past 100 years. The U.S. deployment of global military power, diplomatic relations and global economic operations were all conducted to protect vital oil interests. Now, the United States is also trying to move away from the industries of the 20th century, represented by oil and the automobile industry that depends on the U.S. The withdrawal from Afghanistan is a good example of this change in direction.

A very divisive struggle is taking place in the United States over the speed and direction of this industrial paradigm and energy transition. Supporters of Donald Trump believe the U.S. should overtake China and other rivals with respect to the oil and gas-based automotive industry, a field in which the U.S. has an overwhelming advantage.

These arguments by Trump’s base are based on the belief that China cannot be overtaken by electric vehicles and renewable energy given the current situation in the United States, where there are almost no raw materials and industrial ecosystems for future industries such as electric vehicles and renewable energy. Moreover, they do not accept that strong oil and gas power should be voluntarily eliminated.

The biggest obstacle to Biden’s electric vehicle transition policy is that the United States does not have many rare earth metals that can be considered raw materials for electric vehicle production. The U.S., which dominated the petroleum market which provided raw material for the automobile industry in the 20th century, is well aware that its failure to control rare earth metals is a major failure. An alarm has been sounded to maintain the status of the U.S. in the 21st century.

Traditional metals such as aluminum, iron and copper make up 99% of the planet’s crust. Rare metals, including more than 100 types of rare earth materials that make up the last 1%, are essential for the manufacture of electric vehicles, renewable energy and advanced weapons. China currently dominates the production, processing and distribution supply chain of rare metals.

The metals in question include nickel, tungsten, magnesium, lithium, indium, cobalt, platinum, rare earth, gallium, titanium and zirconium. The most important component for electric vehicles, wind turbines and advanced weapons is a rare earth permanent magnet called a super magnet. The rare metals indium, gallium and neodymium are required for key components in electric vehicles, LEDs and lighted displays. Magnesium is only one-quarter the weight of steel, so it is used in mobile phones and computers that must be lighter in weight.

Rare metals are the oil of the 21st century. Currently, the industrial ecosystem for raw material production and making material components is found mainly in China. It is the result of the continuous transfer of rare metal production and material component technology from the U.S., Europe and Japan to China since the 1980s, not merely because of cheap labor in China at the time. Apple, Samsung, General Motors and BMW all moved their factories to China to take advantage of cheaper rare earth materials available there. Accordingly, the economic value transferred from the American Rust Belt to China amounted to about $4 trillion. This is equivalent to Germany’s gross domestic product.