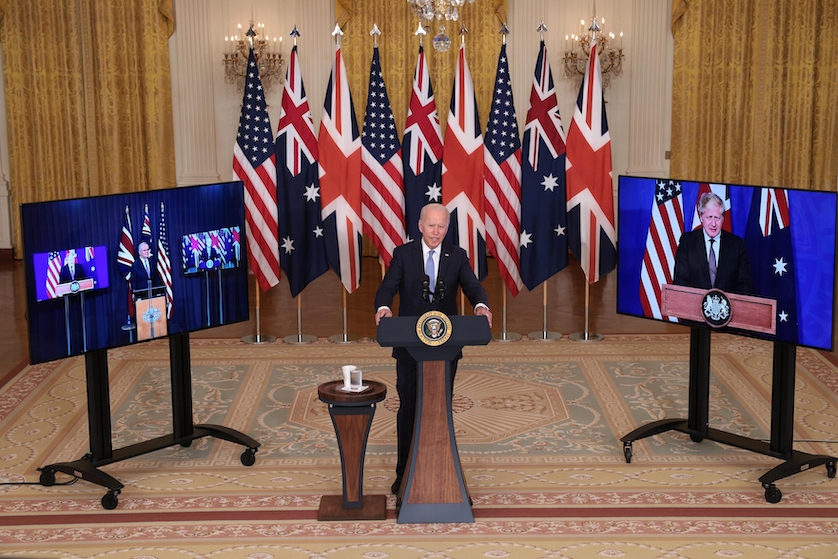 America, Britain and Australia have agreed to set up a new framework for security cooperation in the Indo-Pacific region. It aims to strengthen their containment power against the rising military of China.

These three countries, like Japan, share the values of democracy and the rule of law. We hope that they will also combine their diplomatic power and aim for regional stability.

The American, British and Australian heads of state issued a joint announcement online describing the cooperative framework as AUKUS, after the initials of the three countries. As its first initiative, America and Britain will cooperate in building Australia’s nuclear-powered submarines.

The Biden administration is bolstering its coordination with allies and other cooperative countries in competing with China. The first summit meeting of the Quad (America, Japan, Australia and India) will be held on Sept. 24 in Washington, D.C.

Australia is sounding greater alarm and increasing its criticism of China over China’s maritime advances and human rights issues; bilateral relations are worsening. The situation is the same with Europe. Britain has announced diplomatic and security policies that focus on the Indo-Pacific region and has deployed the aircraft carrier Queen Elizabeth to the area.

America has alliances with Britain and Australia, but meaningfully, the three countries are moving toward practical coordination among themselves. The agreement is replete with cooperation on a wide range of issues such as artificial intelligence. In particular, nuclear submarines, which can operate silently underwater for a long time, are the embodiment of military secrecy. Providing that technology means that the level of cooperation has risen substantially.

If Australia decides to develop nuclear submarines, its ability to contain China from the South China Sea to the Pacific and the Indian Ocean will increase, in turn possibly alleviating the burden on the United States.

But we have to avoid a situation which increases China’s sense of alarm and intensifies the chance of military conflict. Australian Prime Minister Scott Morrison says that “Australia is not seeking to establish nuclear weapons,” but he must avoid giving the world the impression that he is moving away from nuclear nonproliferation.

In a recent phone conversation, the U.S. and Chinese heads of state agreed to preserve points of contact to avoid any accidental confrontation. It is vital to balance containment with dialogue while the countries work to ease tension.

*Editor’s note: Readers may view this article in its original Japanese through a paid subscription.