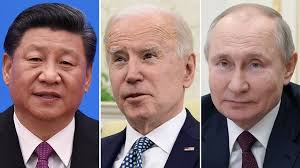 “Trump wanted to start a nuclear war with China.” The confrontation between Beijing and Washington is no longer a languid matter.

Chinese President Xi Jinping refused a personal meeting with U.S. President Joe Biden. Actually, he didn’t refuse. It all depends on who you believe: either the authoritative British newspaper, the Financial Times, which is not usually inclined to stir the pot in the media; or Biden himself, a politician who, after the withdrawal of troops from Afghanistan, doesn’t need another demonstrative humiliation in the international arena.

Personally, I tend to believe the Financial Times. Unlike his two predecessors, Jiang Zemin and Hu Jintao, Xi is not just another high-ranking functionary who is willing to limit himself to two terms then gradually retire. Given at the usual time frame in which senior personnel rotate positions in Beijing, Xi’s retirement is already around the corner in 2022. But, as almost everyone has already assumed, Xi is not going to retire and take a pension. Instead, he is going to take his honorable place among the greatest modern rulers of China, next to Mao Zedong and Deng Xiaoping.

From the propagandist point of view, he has already secured that place. The Western media are full of headlines like “Xi’s Cult of personality is a danger to China” (from the same Financial Times). The Chinese media respond to this with pleasant examples that show how China humanizes leaders. For example, in the People’s Daily, Beijing’s official newspaper, the media reported, “Chinese President Xi Jinping called on the border troops to conscientiously perform their duties to protect the country’s borders and achieve a new feat in the name of the Communist Party of China and the people.

“Xi, who is also secretary-general of the CCP Central Committee and chairman of the Central Military Council, made these statements in a letter responding to the model battalion of the People’s Liberation Army of China stationed in the high-mountain region.”

The question is why such a great leader would immediately agree to meeting with a placeholder American president whose high-ranking Cabinet members, the secretary of state and national security advisor, recently turned a business meeting with their Chinese colleagues in Alaska into a public flogging. No, that’s not the Chinese way at all!

Xi quoted an ancient poem during a telephone conversation with Biden, which read, “Ridges of mountains, a network of streams — there seemed to be no way forward, but suddenly a village appeared in front of us under the shadow of willows.” The poem hinted that the “village” would appear only when the United States stops pursuing a policy that seriously complicates bilateral relations.

And since Biden is a simple man who is not trained in poetry, the same idea was humiliatingly hammered into the American president’s brain in a more straightforward way, with the help of high-ranking American officials, with the publication of an article by the uncensored and knowledgeable newspaper from Hong Kong, the South China Morning Post. When U.S. Deputy Secretary of State Wendy Sherman arrived in Beijing recently, she was unable to meet with any Chinese official of equivalent rank for a considerable period of time. When former Secretary of State and now Special Representative of the U.S. President for Climate John Kerry visited China, he had only slightly better luck. Foreign Minister Wang Yi arranged to meet him — but only by video link. It is not clear why it was necessary to fly several thousand miles for this.

Doesn’t all of this remind you of a kindergarten fight? Using that analogy, it can be said the Americans started it.

The South China Morning Post reported several more colorful facts. The financial director of one of the largest Chinese (and global) communications corporations was arrested in 2018 in Canada at the request of the United States while Xi was having lunch with President Donald Trump at the Group of Twenty summit in Argentina. In addition, there’s the matter of Also, there’s the fact that Wang Yi learned during a flight to that ill-fated meeting in Alaska that the U.S. had activated sanctions against China on the grounds it had suppressed democracy in Hong Kong.

Indeed, things are not going well lately for the personal meetings between the big Chinese and American bosses. And it is not surprising that, according to Chinese media, Xi will appear at the Group of 20 summit in Italy this October by video, rather than in person. Will the Chinese leader still be accused of creating COVID-19 in a lab?

It is better not to put oneself in an embarrassing situation. If you are tired of this long-running story about small (or not very small) political swordplay, then I have information for you about that is as explosive as a nuclear bomb. And it actually concerns nuclear weapons.

Last fall, Bob Woodward, the famous American reporter, wrote that the chairman of the Joint Chiefs of Staff of the United States, Gen. Mark Milley, seriously feared that Trump would start a nuclear war with China. At the time, Trump was distraught after losing the election, and Milley called his colleague in Beijing twice with assurances that he would prevent Trump from acting.

In short, the confrontation between the U.S. and China is very serious. What’s more, it is even quite bad for Russia, in theory. However, the more Beijing and Washington compete with each other, the more opportunities Moscow will have to play its game. The only pity is that so far, this perspective is not much, practically speaking. Maybe we can learn from China’s strategic patience. Remember what Xi told Biden about the “ridges of mountains and a network of streams”? We could get comfortable and wait for the “village under the shade of willows” to appear. I hope that we will wait.