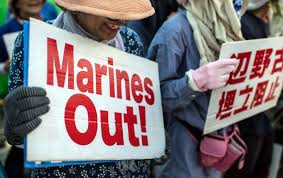 How much unreasonable behavior from U.S. forces in Japan will the Japanese government tolerate? After everything, Japanese taxpayers will be asked to foot the bill when no such expenditure should have been required. The situation is simply outrageous.

In late August, U.S. forces stationed at Marine Corps Air Station Futenma in the city of Ginowan, Okinawa Prefecture, released water contaminated with organofluorine compounds, suspected to be carcinogenic, into the local sewage system. Despite reports indicating that the contaminated water had undergone decontamination, investigations by the city detected levels of the compound 13 times higher than national interim guidelines and target levels.

In response to the growing concerns of residents, the Japanese government announced it would retrieve and incinerate the untreated contaminated water stored in underground water tanks. This will cost approximately 92 million yen (approximately $820,000) for the 1,800 drums of water (approximately 95,100 gallons) concerned. It is expected that the cost of repairs to prevent water storage tanks overflowing during rainy weather will be added to this figure.

Organofluorine compounds are found in fire extinguishing foam used in aircraft accidents. Some of these chemicals are regulated internationally, and while U.S. forces plan to replace them eventually, they are duty bound to protect the local environment. Japanese authorities are not responsible for disposing of these chemicals.

If there is no specific stipulation in the Japan-U.S. Status of Forces Agreement, which establishes the legal status of U.S. forces in Japan, or its accompanying documents, the Japanese government should request that U.S. forces in Japan safely incinerate the remaining contaminated water.

After all, if Japanese authorities agree to dispose of the contaminated water without any legal impetus to do so, won’t this create a precedent for other U.S. bases to follow?

Environmental pollution around U.S. bases in Okinawa is not a new phenomenon.

High concentrations of compounds have been detected intermittently in waterways and other areas near other U.S. forces sites such as Kadena Air Base. Last April, a fire extinguishing system malfunction at Futenma caused a leak of fire extinguishing foam that spilled into the city of Ginowan.

At the time, Japanese authorities cited the Japan-U.S. Agreement on Environment, a supplement to the Status of Forces Agreement signed in 2015, for the first time in order to enter the base and conduct an investigation. However, the investigation was limited to major accidents and related incidents, meaning the Japanese authorities still do not know how much fire extinguishing foam and contaminated water is stored on every base accommodating U.S. forces or what disposal methods are routinely used.

This situation demonstrates the need to drastically amend the Status of Forces Agreement so that all Japanese laws, not just those concerning the environment, are applied to U.S. forces in Japan. As citizens of Japan, we should all be aware of this serious issue affecting Japan’s sovereignty.