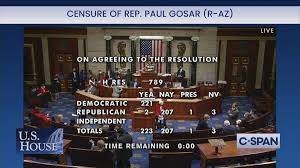 A Republican congressman dares to joke about the murder of a Democratic colleague without shocking leaders of his own party. Where did the idea of decency in political debate go?

How can this course of events not make you dizzy? Take a look. During one week in the United States, Steve Bannon, one of Donald Trump’s former advisers, surrendered to the FBI after refusing to cooperate with the Congressional committee that is looking into the attack on the Capitol on Jan. 6 and promising Democrats “hell.” The next day, one of the rioters, the “QAnon Shaman,” who wore a hat with horns, gets 41 months in prison. Two other high-profile trials make headlines, against a backdrop of racism.

But that’s not all. On Wednesday, Nov. 17, the House of Representatives, in a rare move, voted to censure Republican Rep. Paul Gosar, an ardent Trump supporter who is close to the far right. He tweeted a video depicting himself beheading progressive Democratic Congresswoman Alexandria Ocasio-Cortez and attacking President Joe Biden with a saber. He has received the support of Republicans, except for two who have already been sidelined.

Look around. Is this an isolated incident? We would be wrong to see it as simply a joke made in poor taste by a polarizing politician. A sign of extreme political polarization in the United States, Gosar’s attitude is problematic for more than one reason. By normalizing violence in politics, he is encouraging hatred. And he’s not alone. Do we need to be reminded that Rep. Marjorie Taylor Greene, a follower of QAnon, thinks that Nancy Pelosi deserves “a bullet to the head”?

Where Did Decency Go?

Of course, it is not surprising that people are getting animated a year before the midterm elections, when Republicans hope to take back a majority in Congress. By the way, Trump’s return to the White House no longer seems totally fictitious. But the Republican leadership’s attitude gives us pause. And it is a taste of the battles to come. Where did the idea of decency in public debate go? On Nov. 17, the Republican minority leader in the House did not take offense at the images of a member of Congress being murdered, but rather at the sanction imposed by Democrats, calling it out as an “abuse of power.”

But a member of Congress parodying Ocasio-Cortez’s beheading not only insults the institution and risks encouraging real acts of violence, as on Jan. 6; it is another assault on democracy.