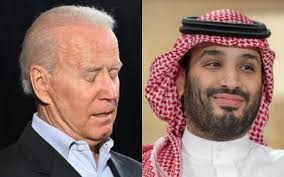 Early last month, the Biden administration informed Congress that it has no objection to a new arms deal with the Kingdom of Saudi Arabia, worth more than half a billion dollars and which provides air-to-air missiles to Riyadh to enhance its defense capabilities.

Let me rewind a bit and remind you about the statements President Joe Biden made during his election campaign, which included extensive promises regarding Saudi Arabia. Biden has worked hard to make good on these political promises by negotiating with both parties in order to validate the sentiments of American voters.

During his campaign, Biden pledged he would not sell weapons of any kind to Saudi Arabia, under the pretext of the “war” in Yemen, as he calls it. While this is Biden’s perspective, in Saudi Arabia, we see it as self-defense to restore the legitimacy of President Abdrabbuh Mansur Hadi’s government, which the entire international community has accepted. It was the result of a political process that the Gulf initiated and everyone accepted both in Yemen and elsewhere. Riyadh remained silent at the time of Biden’s promises, as it always does; this has been the code of Saudi politics since ancient times. It always ignores polemics and wars of words, as this is an unhealthy art and something that Saudi decision-makers do not excel at. The important thing is that Saudi Arabia did not let these statements stop it from acting; rather, it searched for alternatives through its strategic relations with the world’s top arms-producing countries such as China and Russia, which is its legitimate and undeniable right.

Indeed, what happened was that negotiations between the Saudis and the Russians were at their height, and not just between an arms seller and a buyer, but part of long-term strategic relations touching on many areas.

It seems this worried the White House, and Biden found himself faced with a modern, sophisticated Saudi policy that does not depend on one party, an approach that is not based on maneuvering and playing strong and weak cards, but a policy based on the global weight the Saudis bear. It is something that Washington politicians are ignorant about or ignore, due to American pride and the reigning title it bears as world’s “No. 1 country.”

In pursuing this political approach, Saudi Arabia has proven that it is not subordinate to any country, no matter how powerful, and it refuses to acquiesce to any form of political extortion. At the same time, Saudi Arabia took a position of reciprocity with the U.S. through the available alternative options for a deal.

One might ask here whether the OPEC+ meetings last month, after which Washington announced it had approved the deal and there was an increase in oil prices to $80, play a role in changing America’s attitude about Saudi Arabia. From what I can see, yes, the U.S. has faced a set of dilemmas, most notably that oil producing countries have disregarded America’s request to increase production by more than 400,000 barrels per day, a figure that these countries agreed to reject in their last meeting. This created a sense of U.S. urgency, as it turned toward its domestic energy capacity. I believe that the U.S. energy secretary hinted that the administration should take measures to address the rise in gasoline prices, searching for some of its own resources to assuage U.S. public opinion. However, a collision with international market prices is inevitable.

Returning to the main issue that is the basis for this article, and veering away from economics and figures, of which I am ignorant, I want to point out that Saudi Arabia contributes indirectly to the U.S. through its deals, regardless of the content, weapons or otherwise. How you may ask?

By creating job opportunities for American citizens in factories working to fulfill Saudi orders, which greatly benefits Washington by reducing growing unemployment rates, which were primarily caused by the current administration. In addition, this contributes to reducing crime, which is often based on desolation and the urgent need to survive. I won’t delve too much into this, since it is a broad and deep area.

Modern Saudi political policy necessarily calls for a developed form of interaction that matches some of its strengths, the first of which is that Saudi Arabia is a great country with political, economic and social capability. Above all, there is its religious position, followed by its ability to assert influence in many ways, most notably moderation in inflamed areas.

Then, there is its ability to have the final say with respect to vital energy indicators, which the whole world needs. Saudi Arabia possesses elements of power accompanied by a new and modern political mentality that helps it see beyond the political maneuvering of successive White House administrations undertaken for purely electoral purposes. Therefore, as long as Riyadh disregards the U.S. and works quietly and deliberately, it will convey great wisdom, high values, deep morals and a great public image. I hope that Washington understands and supports the modern Saudi political approach, since it has no choice.