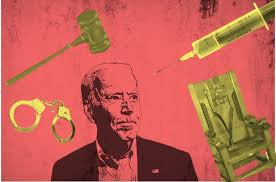 The number of death penalty executions in the United States in 2021 reached its lowest point in over 30 years, confirming a historical downward trend further amplified by the moratorium that the White House imposed last July.

In terms of executions, 2021 was off to a nasty start in the U.S. In the throes of a macabre frenzy, former President Donald Trump’s administration ordered the federal execution of three death row inmates within the three weeks preceding the inauguration of President Joe Biden, bringing to six the total number of executions carried out since the Republican’s defeat in 2020 — a record number as transition periods are traditionally more conducive to presidential pardons than to executions. But the calendar year ended on a more positive note.

In its year-end report, the Death Penalty Information Center, a leading national authority on capital punishment, reports 11 executions in 2021, the lowest number since 1988. That’s a far cry from the numbers seen at the end of the last century. In 1999, 98 death row inmates were executed. In 2021, 18 new death sentences were issued, an equally unheard of number in the recent history of capital punishment in the U.S. This is the seventh year in a row that the country has recorded fewer than 30 executions and 50 death sentences.

“Those numbers are the latest in a consistent downward tendency over the years. For at least 10 years, the number of executions and death sentences has been dropping steadily, and public support for the death penalty is decreasing. It took some time, but the U.S. is finally joining in the international move toward universal abolition,” said Michael Radelet, a sociologist at the University of Colorado, Boulder, who has been working on the issue for over 40 years.* “We are on a trajectory towards a slow extinction of the death penalty,” confirmed Simon Grivet, a scholar of American legal history at the University of Lille, in France. The historian sees at the origin of this trend a “combination of factors,” incorporating miscarriages of justice that have rocked the American public’s faith in their judicial system (186 death row inmates have been exonerated since 1972), the prohibitive cost of the process and the increasing use of real life sentences as an alternative.

A Handful of Recalcitrant States

Geographically speaking, the field in which the death penalty is imposed keeps shrinking. Last spring, Virginia became the first state in the former Confederate South to ban capital punishment, thereby increasing the number of states that have abolished capital punishment to 23. Three more, including California with 700 inmates on death row, have imposed a moratorium on executions; 10 others have not carried out a single execution in the last 10 years. In Utah, where only one execution has taken place since the turn of the century, a bipartisan bill to repeal the death penalty is set for debate during this year’s legislative session.

The practice of capital punishment is now limited to a handful of recalcitrant states, including Alabama and Oklahoma, but especially Texas, where almost 600 inmates have been executed over the last 30 years. The DPIC thus notes in its year-end report that “the death penalty in 2021 was defined by two competing forces: the continuing long-term erosion of capital punishment across most of the country, and extreme conduct by a dwindling number of outlier jurisdictions to continue to pursue death sentences and executions.”

A Moratorium in Place of Abolishing Capital Punishment

Capital punishment is also on a downward trend for federal crimes, be it due to their nature (terrorist acts, for instance) or because they were committed in a location that fell under federal jurisdiction, such as a nation park or committed against a federal employee. On July 1, the White House announced a moratorium on federal executions pending the administration’s “review of policies and procedures” in the matter. According to Attorney General Merrick Garland, this decision is justified by the “arbitrariness in its application, disparate impact on people of color, and the troubling number of exonerations in capital and other serious cases.” At the same time, the Justice Department withdrew death penalty charges against 12 defendants, overtly breaking with the Trump administration, which carried out 13 federal executions.

But the White House continues to support capital punishment in certain cases. The death penalty sentences for Dzhokhar Tsarnaev, convicted of charges related to the 2013 Boston Marathon bombing, and Dylann Roof, who murdered nine African Americans in a South Carolina church in 2015, have been upheld. Yet during last year’s presidential campaign, Biden pledged to abolish the federal death penalty, a promise that a number of elected officials and observers want him to keep. “Biden’s track record after one year in office is lukewarm,” Grivet said. “He had a lot of important issues to address, notably the current health crisis; the death penalty has not been a priority of his. Besides, 2021 has been marked by a very sharp increase in crime rates. Campaigning for abolition in this context would have been difficult.”

Abolishing the federal death penalty in the United States takes a vote of Congress. A bill to end federal capital punishment was proposed by Rep. Ayanna Pressley earlier this year, but it stands very little chance of being passed due to tenuous nature of the Democratic majority in the Senate. “Biden may commute federal death sentences to life imprisonment. To do so, he would need only to sign a piece of paper. But we must give him time,” Radelet said.* There are currently 46 inmates waiting at the U.S. Penitentiary in Terre Haute, Indiana, which holds federal prisoners awaiting the death penalty. There are 2,500 inmates on death row throughout the country.

*Editor’s Note: Although accurately translated, this quoted remark could not be independently verified.