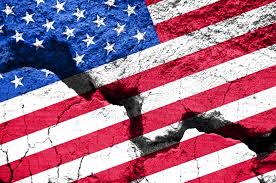 Since the election of Donald Trump in 2016, political polarization in the United States has rapidly worsened, and the discussion of a possible second Civil War has entered U.S. academia as a mainstream topic with relation to industry and government. Trump’s first impeachment trial, coupled with the economic and political impact of the new coronavirus pandemic, the social upheaval caused by the death of George Floyd, a Black man killed by a white police officer who held his knee on Floyd’s neck, and the controversial 2020 U.S. presidential election, led to the January 2021 attack on U.S. Capitol and Trump’s second impeachment trial, all major events that sparked unrest.

Particularly since the attack on the Capitol early last year, an increasing number of American elite are asserting that the United States is caught up in a cold war between the left and the right. Those who foresee a future civil war see the highly polarized population as the prelude. However, some hold a different view, and see this as a nonviolent culture war, based on the lack of a standing army and the predominance of nonviolent tactics on both sides of the political divide.

Yet, some polls have found between one-third and one-half of the nation’s residents expect a civil war in the next few years, especially in mainly Republican and conservative rural regions. Conflicting cultural, moral and religious values, ranging from racial antagonism and gun abuse to positions on abortion and religious freedom, are all sources of tension that are being manifested in many ways. In addition to local confrontations that stir up firestorms, it is also difficult to prevent attacks on information that appear online.

When Abraham Lincoln was elected president in 1860, defenders of slavery in the South refused to recognize the legitimacy of the election, which led to the Civil War and the emergence of white supremacy and terrorist groups that brutalized Black people, including the Ku Klux Klan and the Knights of the White Camelia, whose effects are still felt today. Accordingly, certain historians have looked at the California secession movement during Trump’s presidency, the crackdown on nonviolent protesters with tear gas, approved by Trump, and the controversial 2020 U.S. presidential election, and indeed found similarities with the Lincoln presidency.

Then, there is also the COVID-19 pandemic along with the subsequent social and economic impact, and quarantine policies in which were considered to be overreaching government intervention. It is also concerning that this has bred far-right groups such as the Proud Boys and QAnon, leading in turn to multiple attacks on Michigan’s state Capitol and which some say is likely to bring on a civil war.

Monica Duffy Toft, an American professor of international politics, argues that all civil wars have at least three things in common. First, most civil wars occur following a conflict, usually a previous civil war, or a heavily distorted and politicized reminder of a past civil war, though neither the new belligerents nor the new controversies need be the same as before. In most cases, charismatic leaders spread their ideology and political ambitions, even simple one-sided historical experience, to create links to past glory or humiliation.

Second, national identity is divided along key axes such as race, faith or class. Fault lines and cracks exist in every nation, and there are deeper cracks both domestically and abroad that are exploited by those who wish to redistribute wealth or power. The former Soviet Union and now Russia, for example, have successfully devoted significant resources to weakening the democratic functions of the United States and its allies by deepening existing division in the U.S.

Most importantly, the third characteristic of a civil war the shift from tribalism to sectarianism. With tribalism, people begin to seriously doubt whether other groups have broader social interests at heart. In a sectarian environment, however, economic, social and political elites and those who represent them come to believe that anyone who disagrees with them is evil and is actively undermining society to the point where they ostracize once loyal opposition. Those who have been inside another tribe are considered the most disloyal, in much the same way that some religions treat apostates and nonbelievers. It is not hard to see echoes of this dynamic, for example, among the Republicans in respect to whether one is loyal to Trump or not. In short, this suggests that political polarization has been elevated to the level of faith and division cannot be reconciled; the U.S. now displays all three of the characteristics that contribute to a civil breakdown.

In a book soon to be published, political scientist and civil war expert Barbara F. Walter argues that the rise in domestic terrorism, such as the 2018 Pittsburgh synagogue shooting, and the high rate of gun violence in the United States, could be indicators of an impending second Civil War. Even more notably, financial investors on Wall Street have also been discussing this possiblility.

Last year, billionaire hedge fund manager Ray Dalio predicted there is a 30% chance of civil war in the United States within the next five to 10 years, citing poor financial conditions and high tensions that could lead to a heightened risk of government collapse at both the state and federal levels and violent conflict. In particular, some scholars worry that the 2022 midterm elections and the 2024 presidential election might will trigger a civil war in the United States, especially if Trump or candidates like him contest election results and light a fuse.

In short, warnings from the American elite in many fields have begun to draw Europe’s attention, and they may also be one of the reasons Joe Biden used the Summit for Democracy to gloss over the situation. This situation demands caution and Taiwan in particular may need to pay more attention than ever.