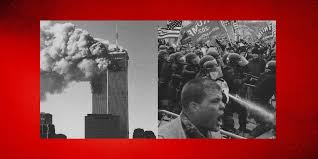 The Capitol siege and the Sept. 11 attacks have far more differences than similarities.

Jan. 6, 2021, and Sept. 11, 2001, are often lumped together. This comparison is particularly popular outside the United States: parts of the European media landscape like to construe a similarity between the two by classifying 9/11 as a turning point for American society. However, they fail to see that the two events have far more differences than similarities.

9/11 was a meticulously planned attack, coordinated from abroad by a relatively small terrorist organization. Wednesday, Jan. 6 of last year, on the other hand, was brought to life by a scheming, racist psychopath who occupied America’s highest office — and it was supported by a significantly bigger organization, infiltrated by terrorists: the Republican Party.

They gave Donald Trump and his henchmen around the equally crazy Rudy Giuliani free rein and, for weeks on all networks, allowed them to sow the seeds of the country’s biggest shame since Vietnam.

Giuliani symbolizes the biggest difference between 2001 and 2021. Back in 2001, the country rallied behind America’s mayor in its collective sorrow and anger against a fanatic religious terror organization.

Shoo Away the “Elephonkey” Together

In 2021, however, the former national hero became a laughingstock as well as the symbol of a deeply divided society, separated by a wide rift. The country came together once again, but this time as two hostile forts — because now the enemy has become a domestic one.

CNN aired a fantastic ad in November 2021 before the elections. An elephant (the Republican Party symbol) sat on a park bench next to a donkey (the Democratic Party symbol), between them lots of space and even more resentment. An elephonkey, a creature half elephant and half donkey, approaches. Brusquely they shoo him away. Together.

This has been America’s modus operandi since at least Jan. 6, 2021: No more room for compromises. No room for national solidarity. And even less for 9/11.