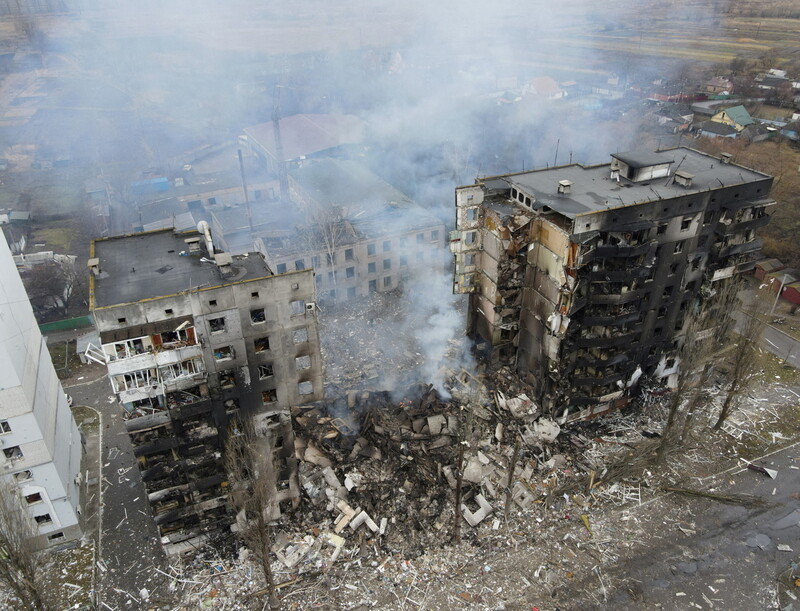 George F. Kennan was a legendary American diplomat and the foremost authority on Russia. He was called the “Father of the Cold War” after he published “The Sources of Soviet Conduct” in the July 1947 issue of Foreign Affairs, in which, writing anonymously as “X,” he called for the need to contain the Soviet Union. New York Times columnist Thomas L. Friedman addressed Russia’s recent pressures on Ukraine, recalling a phone call he had with Kennan when the Senate ratified NATO’s expansion into Eastern Europe in 1998. Kennan had told him it was “the beginning of a new Cold War” and that it was “a tragic mistake.” It was just more than a year before Vladimir Putin would come to power in Russia.

Twenty-four years later, that tragic mistake has become a reality in Ukraine. Russia’s actions instantly shocked Europe as it plunged the continent into a hot war, unlike a cold war in which threats are exchanged but never escalate into actual conflict. Putin, who has not hesitated to threaten nuclear war, has dramatically revived the dormant fear of Russia that exists in the European consciousness. It was a familiar pattern that has existed in modern times in which weak countries that surround Russia disappear from the map when Russia rises in power and reemerge when Russia declines.

Putin and Russia are, of course, responsible for the brazen invasion of a sovereign state and the resultant humanitarian catastrophe. However, looking for someone to blame and seeking a solution are two different matters. Confidence that you can bring a powerful nation like Russia to its knees may be leverage for political propaganda and mobilization, but it is not a practical approach. The very fact that the United States itself is avoiding direct conflict speaks to how fundamentally limited the means of containing Russia are.

Putin has a motive for acting, whether or not he views it as evil. Russia’s strategic thinking has been firmly in place since the Cold War and, in some ways, even long before that. When he met with Joseph Stalin in Yalta on the Crimean Peninsula in February 1945 near the end of World War II, Britain’s Winston Churchill called for a “free and independent Poland,” because it was “what we went to war against Germany for.” Stalin remained firm, saying that “throughout history Poland has always been a corridor for attack on Russia” and that “during the last 30 years our German enemy has passed through this corridor twice.”

Putin is the most powerful Russian leader since Stalin. NATO’s hasty eastward movement led to a desire for revenge and a siege mentality on the part of Putin, who is the heir to Stalin’s geopolitical philosophy. Putin, who views the collapse of the Soviet Union as the “greatest geopolitical catastrophe of the [20th] century,” believes the United States has gone too far, and Russia has been betrayed. Combined with his lust for power, the sound of gunfire has rung out. Again, a weak neighboring country is the target. Like Stalin at the end of World War II, Putin is intractable. Despite the fact the United States and Europe have emphasized that NATO’s expansion does not threaten Russia, the message does not appear to be getting through at all.

The United States has also mistakenly underestimated Russia’s strength. A widespread perception has grown within U.S foreign policy circles that Russia might enjoy a flash of success from the boom in its energy exports, but limits on that success would become clear in the mid to long term as the fossil fuel era ends and population declines. This analysis also underlies the movement that has shifted focus to China. This outcome may prove true later, but the overwhelming center of attention right now is Putin’s powerful willingness to wage war.

It remains to be seen whether the bipolar era will reemerge in earnest in Europe or whether this war will boomerang for Russia as the war in Afghanistan did. What is clear is that the continual need to make life-or-death decisions only invites a bigger battle. The United States and its allies should seriously consider how far they will go in opening a course of retreat for Putin. Both sides must exercise the wisdom of using pressure as the means of compromise rather than as an end in itself.