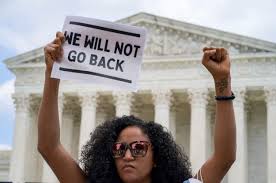 The problem is that this sector has mixed with racist or extremely conservative groups to try to revive a United States that never existed, except in films, TV programs and their imagination.

To say the United States is a divided nation sounds like old news now, but it’s important to highlight the problematic moment in which it finds itself.

Just as in other countries, American conservatives hope to revive what they believe their country was — 50 or 100 years ago. They hope to rekindle old ideas or ideals they believe to be central to confronting new trends and technologies, social movements and interdependencies in a world fundamentally different from the one in which they grew up.

It’s difficult to explain the U.S. Supreme Court’s most recent decision overturning the 1973 decision that decriminalized abortion and opened the door not only to a woman’s control over her own body, but also to the concept of sexual rights. It is difficult to explain without remembering that the world’s leading power has a deeply religious and conservative sector that still believes religious mandates are the only ones that matter.

The problem is that this sector has mixed with racist or extremely conservative groups to try to revive a United States that never existed, except in films, TV programs and their imagination.

It is no surprise that the states where conservatives have met with greatest success are those that formed part of the Confederacy, which, in defense of slavery, tried to secede and led to the Civil War (1861-1865).

This group, which represents approximately 30% of the population, has managed to convince at least an additional 20% that its ideas are worthy. It’s a demonstration of political ability, of a long-term strategy, as the patient installation of an overwhelmingly conservative majority on the Supreme Court demonstrated. It represents the division and weakness of the left.

In any case, it’s a new chapter in the culture clash — urban versus rural, liberal versus conservative, chauvinist versus feminist, rigid versus tolerant — in which the group appearing to have the upper hand today includes those who believe that self-reliance, limiting the rights of women and minorities and returning to the norms of the 1950s are the solution to their country’s problems.

In this context, it’s hardly surprising that some would go so far as to dust off 19th century laws, such as the abortion ban that was recently reinstated in Wisconsin.

Even worse, some have started to debate the possibility that the decision may lead certain states to try to prevent their residents from traveling elsewhere for medical interventions that, like abortion, are now illegal in their home states.

Incidentally, one of the major grievances of slave owners was that slaves who escaped to the North or to Mexico were not returned.

It’s hard to evaluate the impact of this new situation, except that many believe it may lead to a backlash from the center and the left, in an effort to restore this broken equilibrium and focus on domestic issues.