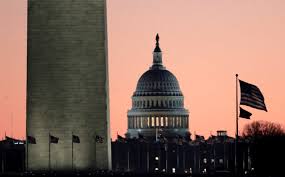 Without fear of exaggeration, the situation in the U.S. today is chaotic and worrying: there is an increase in mass shootings combined with the gun lobby’s resistance to regulation, the regression of women’s reproductive rights and the threat that the elimination of rights will expand to other groups.

The United States is going through one of the darkest moments in its recent history with regard to domestic affairs. The unfortunate wave of extreme political polarization that is sweeping the world has had a special impact on our neighbor to the north and has intensely revived its domestic demons.

Although the U.S. — like any other country — has suffered regrettable episodes of social and political crisis, I think that the potential ramifications of the current episode are unprecedented, not only for America, but for the socio-political setting of the world in the years to come.

I know it’s a cliché, but the arrival of a figure like Donald Trump as president caused a chain reaction and awakened old grudges and rivalries inherent in many Americans since the Civil War; rivalries that have remained more or less on the sidelines for over 100 years.

It is no exaggeration to say that the situation in the U.S. today is chaotic and worrying: there’s an increase in mass shootings and the gun lobby’s resistance to regulation, the regression of reproductive rights for women and the threat that the elimination of rights will then expand to other groups, increasing polarization of public debate and the resurgence of far-right movements that have hijacked the Republican Party. All of these things are pushing the country to the edge of a cliff.

Now, the deep social and political crisis that the United States is experiencing is neither unexpected nor exclusive to the United States. It is due to a global problem whose origin lies in the unfulfilled promises of liberal democracy and in the widespread weariness of social sectors that have been unable to enjoy the abundance that capitalism promised.

And what is really worrying here is that liberal democracy isn’t guided by democratic processes, but by the inability to create alternatives that encourage deep reflection on those new social pacts where unity breaks down due to the lack of a narrative as well as concrete actions that foster inclusion and development.

What is worrying is that our differences continue to be exacerbated, and that we are losing our ability to engage in respectful, considerate dialogue with awareness of one another. In a mirror effect, a similar phenomenon is happening in our country. I believe we must not underestimate the scope of these social frictions and divisions. If we look to history, we see that this has happened before. Can we afford to continue down the same path?

About Adam Wambeke 15 Articles
Hi, I'm Adam from the United States. I live and grew up in Minnesota. I studied Spanish Language, Literature, and Culture at Minnesota State University, Mankato from 2010-2014. I studied abroad in Spain during the summer of 2012 and would love to return to Salamanca someday. Linguistics has been an interest and a passion of mine since a young age. I'm also a musician, a cook, and a fan of science fiction, amongst other things.