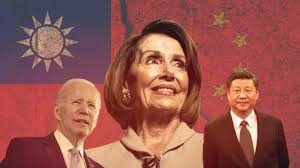 Someone could legitimately wonder how it was possible that Nancy Pelosi, the American administration’s third in the line of power, could have decided of her own volition to fly to Asia and trigger World War III.

The speaker of the House, who earned the gracious nickname “Satan” from her Trumpist political opponents, is certainly not new to these initiatives. No, we aren’t referring to the 1991 protests in Beijing, but more recently to 2020, when Pelosi pushed for invoking the 25th Amendment, which provides for replacing the president in the event of death, removal, resignation, or incapacitation. We should keep in mind the time when “Sleepy Joe” showed the first signs of dementia, shaking hands with the ghosts of Lincoln and Jefferson. It could thus be said that Pelosi wasn’t aiming for Donald Trump’s resignation but rather that of her future president.

However, her presence in Taiwan seems to be an extremely desperate move while the Democrats’ agenda slowly falls to pieces. Those who are ignorant about Asian culture will certainly be surprised to see how a “vice-vice president” visit could spark such a belligerent reaction. It should be remembered that, despite the outcome of the Chinese elections in October being all but a given, the internal administration of the Beijing parliament includes opposing forces in which the faction of Jiang Zemin, holder of military power, is confronting President Xi Jinping’s executive authority. The same unrest caused by the COVID-19 emergency might be deployed as a pretext for adjusting the balance of power in view of any imminent conflict.

Pelosi’s provocative presence may thus represent destabilization within the Beijing government, which, if it does not prove itself to be in control of its own adversaries, could emerge so weakened that it risks a coup, as Chinese history teaches us. The current Chinese media narrative obviously exudes anti-American sentiment, but also feeds the dissension of the Taiwanese population, which, according to the tabloids, feels more menaced by Pelosi’s impudence than by Beijing’s consequent reaction.

If, however, Xi were to follow the dictates of Chinese martial tradition, we can expect both that damage to the island of Taiwan will be avoided at all costs, and a strategy will be implemented that includes striking the enemy (in this case, Japan, which would serve as the armed wing of the United States) only when it least expects it — and therefore, not in the immediate future.