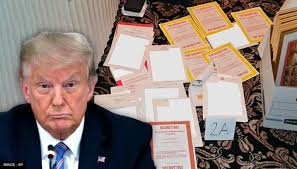 Reading the Federal Bureau of Investigation’s affidavit regarding Donald Trump’s actions, it appears that the situation is even more serious than what the media had managed to report, even if the affidavit is substantially redacted.

First, the FBI agent informs the judge that, during his investigation, he found certain evidence of criminal activity, but has chosen to focus on evidence of illegal retention of confidential, secret or top-secret documents. Second, the affidavit refers to laws pertaining to national defense.

In addition, the FBI cites law relating to espionage involving foreign powers. These disclosures suggest what FBI agents were looking for. The affidavit also explains that the search warrant was based on the fear that several documents would disappear.

Finally, the FBI agent explains that, for several months, Trump refused to cooperate and hand over the documents, claiming that he could declassify any documents he wanted on his own anyway.

Trump could have sought to declassify records while he was president. He is no longer in office and therefore, this defense does not hold up.

Why Is the Statement Redacted?

There are several reasons. Before the judge ordered its release, the Justice Department objected to making it public to protect FBI informants and to prevent evidence from being destroyed in potentially related investigations.

Why Did Trump Seek To Keep the Documents Classified?

It’s possible that in the rush to leave the White House, Trump may have inappropriately taken documents with him. (A lack of planning for his departure further supports the theory of an attempted coup.) However, if you read the affidavit, you can see why such an excuse fails. For months, Trump deliberately withheld top-secret documents. Worse, Trump poorly secured the materials. It’s anyone’s guess as to what his deeper motives were, from narcissism to espionage to an attempt to make money from the documents.

What Does Trump Want?

Trump wants people to believe that the American justice system is biased. It is not. A search of an American citizen’s home is an extraordinary act that can only be authorized under specific circumstances. Searching the home of a former U.S. president is a historic first. The FBI therefore prepared for the raid with the utmost care. This is true especially since Trump has the financial means to hire the best lawyers.

Why Was the Affidavit Disclosed?

This game is not only played out in court. It is also played out in public, as are all major trials. In the end, the American people must feel that justice has been served, or the judiciary will be undermined. In general, this sense of justice is based on the nature of the crime committed, the reputation of the accused and the arguments made in court. But Trump does not seem interested in debating the facts. Instead, he is trying to make it appear that the American justice system is in Joe Biden’s back pocket. This is an aberration to anyone who knows about the separation of powers in the United States. It is also an implicit admission that he cannot fight the facts because he is guilty.