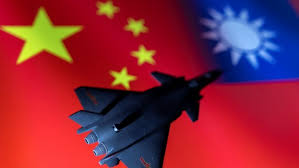 Speaking at the 5th National Reunification and National Rejuvenation Seminar, Yuan Zheng, deputy director of the Chinese Academy of Social Sciences’ Institute of American Studies, said recently that national reunification and national rejuvenation depended on our own efforts and on the people on both sides of the Taiwan Strait. As long as we continued to strengthen ourselves and make adequate preparations, he said, the reunification of the two sides would only be a matter of time.

“The great undertaking of China’s national reunification is facing major challenges,” Yuan noted, pointing out that in the context of strategic competition with China, the United States was using Taiwan to control China and engaging in a policy of “one China, one Taiwan.” Referring to Taiwan’s Democratic Progressive Party, he said they were bloated with arrogance in their reliance on the United States, that the proportion of Taiwanese who advocated maintaining the status quo or seeking independence was increasing, and that the issue of Taiwan was becoming progressively internationalized.

Further analyzing the internationalization of the Taiwan issue, Yuan argued that the Biden administration had strengthened its alliance system and constructed a united front against China and that this had included goading its allies into intervening in the Taiwan Strait under the pretext of maintaining peace and stability but with the aim of increasing the strength of anti-China deterrence in the region. Joint statements issued after bilateral meetings between the United States and Japan, South Korea and Australia all expressed concern for stability in the Taiwan Strait and encouraged the “peaceful resolution of cross-strait issues.” Whether AUKUS, the trilateral alliance between the United States, Britain and Australia; the Quad, the quadrilateral dialogue between the United States, Japan, India and Australia; or the Five Eyes of Australia, Canada, New Zealand, the United Kingdom and the United States, all have coordinated with each other to intervene in the issue of Taiwan. In their topics for discussion and their joint statements, the Group of 7, the European Union and NATO mention the Taiwan issue for the first time. The United States has held a number of military drills around China in conjunction with its allies, and the Biden administration has continued its gamesmanship aimed at encouraging third parties to develop relations with Taiwan. (Support from the United States is what lies behind Lithuania’s improved relations with Taiwan, for example.) The Biden administration’s manipulations has further internationalized the Taiwan issue.

According to Yuan, one can break down the rationale behind the United States’ moving to enhance U.S.-Taiwan relations as follows: First, in terms of strategic positioning, the Biden team has always regarded China as its “biggest strategic competitor.” Second, as the strategic game between China and the United States intensifies, the United States is using Taiwan to control China, playing the Taiwan card ever more frequently. Third, the Biden administration is pursuing values-based diplomacy and attempting to pit a “democratic society” against an “autocratic regime.” Fourth, there is demand within the United States to lend Taiwan more support, with growing calls for improved U.S.-Taiwan relations. Fifth, authorities in Taiwan’s Democratic Progressive Party are relying on -– and are in lockstep with –- the United States for independence, willing even to act as their pawns to that end. And sixth, the United States considers China’s move to suppress the insolence of Taiwanese independence and safeguard Chinese national sovereignty as an act of provocation that unilaterally changes the status quo, thus weakening regional peace and stability.

In a similar vein, Yuan analyzed possible future scenarios from the United States designed to control China using Taiwan. First, the United States increases its military presence and activities in the Taiwan Strait region to further enhance its deterrent power and prevent China from achieving the great cause that is its national reunification. Second, U.S.-Taiwan defense cooperation is further deepened to enhance Taiwan’s asymmetric warfare capability. Third, it cannot be ruled out that the United States rename its Taipei Economic and Cultural Representative Office as the “Taiwan Representative Office in the United States,” thus providing an additional boost to U.S.-Taiwan relations. Fourth, the United States takes substantive measures to support Taiwan’s expansion into the international space so that it can participate meaningfully in the activities of international organizations. Fifth, the United States and Taiwan strengthen discussion and cooperation in efforts to enhance economic and trade relations and move toward the establishment of a U.S.-Taiwan free-trade area. And sixth, the United States includes Taiwan in its Indo-Pacific Strategy to maintain the encirclement, suppression and blockade of China in high-tech industries such as semiconductors -– particularly in microchips –- in order to slow the pace of China’s research and development in that field as much as possible.

Yuan stated that national reunification and rejuvenation depend on our own efforts and on the people on both sides of the Taiwan Strait, and that as long as we continue to strengthen ourselves and make the appropriate preparations, cross-strait reunification would only be a matter of time.

He also pointed out that, in the game between the two powers that are China and the United States, Taiwan is increasingly forfeiting its voice and becoming more marginalized by the day. In other words, Taiwan’s fate depends on the processes and outcomes of the strategic games, the power shifts in the Taiwan Strait and the strategic contest of wills between China and the United States. The first strategic choice of the United States is to arm Taiwan so as to make China back away in the face of difficulties, maintain a state of nonreunification and non-Taiwanese independence and prevent war from breaking out; the second is to wage a proxy war, in which Taiwan would serve as cannon fodder; and the third option would be for the United States to exit the playing field. But given the huge risks involved, the likelihood of U.S. intervention diminishes the stronger mainland China becomes; instead, the United States is more likely to ring-fence China through nonmilitary means. Taiwan cannot become independent, as that road leads nowhere. It is close to the Chinese motherland and far too removed from the United States. The risks and costs involved for the United States in defending Taiwan are increasing, so it cannot simply allow Taiwan to declare independence unilaterally; and this means that it will be hard to stop the country’s reunification. This is the logical starting point to the United States’ continued assertion that its One China policy remains unchanged, and that it does not support Taiwanese independence.