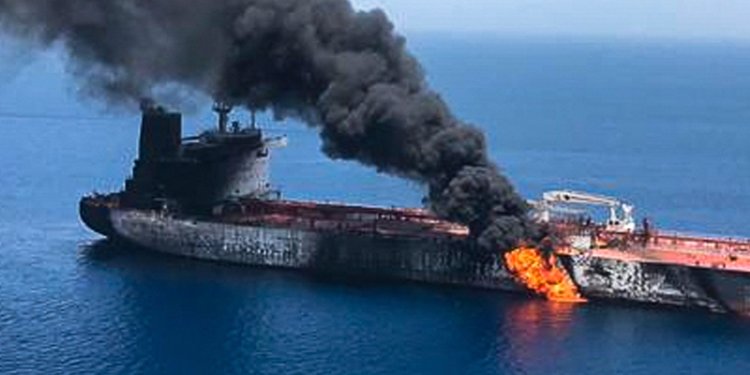 The attack perpetrated on Thursday against two oil tankers in the Gulf of Oman is a firebrand, one firebrand too many, that has just added to the perilous hotbeds of tension that are already affecting the Near and Middle East: namely, the wars in Yemen and Syria, as well as Israel’s regular bombardment of the Gaza Strip.

The most highly flammable region, in every sense of the term, the Persian Gulf separates Iran from the Arabian Peninsula and leads to the Gulf of Oman and the Indian Ocean by the Strait of Hormuz. This makes it the most strategically important, and at the same time potentially the most vulnerable, stretch of the oil route. Many wars have been fought in the past for the control of the routes, by sea or by land, that followed world trade in spices and then silk. We no longer fight for these luxury products, which have been somewhat degraded by artificial flavors and synthetic fabrics. On the other hand, the petroleum god, who retains the adoration of industrialized societies, still has good days and fierce altercations ahead of him.

Even if the modus operandi of the aggressors remains subject to debate (torpedoes, drones or mines), the United States, armed with a video, has lost hardly any time incriminating the Islamic Republic of Iran. The fact is that despite its vehement denials, already issued during last month’s sabotage of four oil tankers off the coast of the United Arab Emirates, Iran is very much the prime suspect. On more than one occasion in fact, this country, hit hard by U.S. sanctions on the exploitation of its oil, warned that it would not wait to be totally asphyxiated to make life just as impossible for other nations. Moreover, Supreme Leader Ayatollah Ali Khamenei did not pull any punches when he notified the Japanese prime minister, there as a mediator, of his refusal to negotiate with the current occupant of the White House.

In the first scenario, if the U.S. accusations prove to be founded, Tehran’s leaders would be, in short, thrown into a dangerous double or nothing situation. Worse yet, could we believe the parties involved, because one is shouting louder than the other, in blackmail that could lead to the apocalypse for all, like the image of Samson tearing down the columns of the temple onto the heads of his enemies? Nevertheless, pure bluster, reckoned Donald Trump yesterday, as he swept aside any risk of closure of the Strait of Hormuz with the wave of a hand.

Other possibilities have not failed to circulate, however. Cited at one point, the Houthis of Yemen, protected by Iran, were exonerated because they do not possess the means for a double operation of this scale. No less brazen is the theory of an isolated initiative by the Iranian extremist group, the Pasdaran, hostile to the moderate and conciliatory policy followed by President Hassan Rouhani.

In a part of the world accustomed to the dirtiest tricks and the most improbable situations, we cannot totally dismiss the possibility of an act of provocation committed by a dormant party, aimed at raising the stakes. In Washington, as in Tel Aviv, there is no shortage of hotheads. And most importantly, the CIA’s false reports on Saddam Hussein’s weapons of mass destruction have not been forgotten: hence the doubts raised by a number of experts about the Pentagon’s video supposedly showing the Pasdaran removing an unexploded mine from the flank of one of the two targeted tankers.

Ultimately, it is unclear whether Trump's blustering tone will halt the sudden rise in crude oil prices and calm the concerns of transporters, insurers and those familiar with the route of black gold. For many people in the region suffering, in spite of themselves, the repercussions of the crisis, the stakes could turn out to be more important than all these waves of dollars.