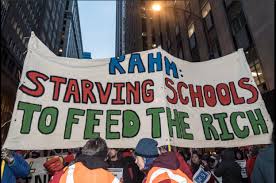 Teachers in Chicago’s public schools went on a one-day strike on April 1.

Barack Obama’s recent attempt to teach us how our country should behave, with particular emphasis on improvement of human rights issues, is still echoing around Havana’s Alicia Alonso Theater.

It just goes to prove the old saying about the person who sees a speck in their neighbor’s eye but is blind to the plank in their own. In this case we are talking about a human right, the right to education.

The strike called by the Chicago Teachers Union affected 400,000 pupils in the United States’ third biggest school district and was caused by the scant attention paid to public education by the Chicago mayor’s office. Public schools lack the funds they need to operate normally. A number of schools have also been closed, with the remaining schools have been obliged to increase class sizes and suffer the adverse effects on their ability to teach effectively.

Who is responsible for all of this? The mayor of Chicago.

And who is the mayor of Chicago? Rahm Emanuel.

And who is Rahm Emanuel? A close friend of Obama and a key figure in Obama’s 2008 election campaign. As Obama’s first appointment as president-elect, Emanuel was named to work alongside him as White House chief of staff.

As with all protests, the striking teachers took to the streets and interrupted traffic on Lake Shore Drive, causing serious disruptions to the already congested Chicago city traffic. Some of the protesters were arrested without major incident, according to police spokesman Kevin Quade in a statement to CNN. Several of the protesters saw it somewhat differently, especially those who received blows to the head and were dragged along the street in the interests of clearing the way for traffic. Maybe the spokesman was referring to the police when he said there had been no major incidents.

Bearing in mind the good relations between Obama and Emanuel, and the fact that Obama lived for many years in Chicago, surely nobody would object if Obama were to visit the city and address public servants on human rights, putting the focus on education and those freedoms so close to his heart, such as freedom of expression — a freedom the Chicago police must not use violence to repress.

Now that would be a good speech for Obama.