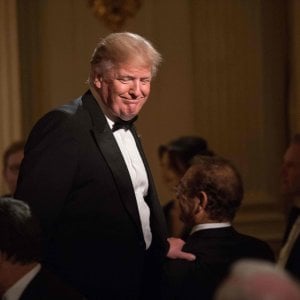 In the matter of the missiles, there is an unknown factor that nobody can assess in the event of a possible war. It is the “T-Factor.”

Looking beyond all the diplomatic calculations, the strategic analyses, the nuclear experiments, the demonstrative missile launches South Korea is now carrying out to not seem intimidated, there is an unknown factor that nobody can assess in the event of a possible war: the “T-Factor.” It consists of the feelings President Donald Trump must be experiencing over Kim Jong Un repeatedly scoffing at and ridiculing him.

“The Donald” sees the world and the people around him through the lenses of his own vanity and his limitless self-esteem. How long can such a man put up with mockery from a small, Third World dictator who is propped up and equipped with weapons from accomplices near and far, and who keeps ignoring threats, rages and Twitter crises?

We know that Trump tends to feel personally insulted by any event, any person who does not bow before him. When Attorney General Jeff Sessions rightfully recused himself from the inquiries into possible political and financial relations with Russia (as he himself had a guilty conscience), the president hurled insults and abuse at him. He called him an idiot in private and publicly buried him under tweets revolving around the adjective “weak” — the gravest insult The Donald can throw.

That is exactly what Kim is doing to Trump; he is depicting him as a weakling, whose bark is worse than his bite. The experiments and the waste of ballistic missiles launched into the Pacific are provocations he employs in his cowardice, which is concealed by China’s triangulation game to humiliate the USA while pretending to keep North Korea in check. China’s goal is to demonstrate that, half a century after the Vietnam War, America still is that “paper tiger” described by Mao Zedong.

Kim Jong Un is betting everything on the helplessness of the U.S., on the impossibility of it launching a pre-emptive military attack. He is confident that he will be able to continue laughing in Trump’s face without consequences, other than a few verbal escalations and some harmless tweet storms.

However, every launched missile, every bomb that explodes underground in North Korea causes a piece of plaster to fall off the wall of the Trump narrative, of the myth of his implacable toughness. How long will the American president be able to accept this before Kim manages to demonstrate once and for all that he cannot be stopped? For Kim, this is “business,” as they say in the jargon of America’s Cosa Nostra. For Trump, this is becoming “personal.” It is no longer America that is being mocked by North Korea. It is Trump himself.