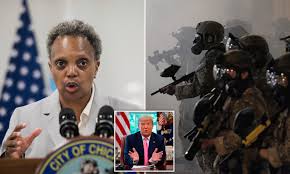 After Portland, the president also wants to send federal agents to Chicago. This will not protect the people there who are suffering the most from COVID-19 and violence.

Tyrice Jones, Jimmy Blumingburg, Miguel Rios, Sincere Gaston, Mekhi James. These are only a few of the gun violence victims in Chicago in recent days. Among them are children, over and over again. The bullets hit them in the torso, in the head while they were sitting in a booster seat in the back of a car, or while playing in the street. Their mothers and daughters, grandparents and neighbors don’t need Donald Trump and his federal police. Nor do they need more aggression or more violence and weapons, even if they are carried by policemen. In no way would that contribute to safety on the streets.

The president’s announcement to send federal police to the third biggest city in the country – “This bloodshed must end. This bloodshed will end” – won’t protect the people who are suffering from the violence, those who must attend another funeral every day. It also won’t prevent drive-by shootings or stop gun violence in the streets.

Major crises facing America are currently taking place in Chicago: the COVID-19 crisis, social injustice and structural racism. This year alone, according to police reports, 414 people have been killed to date in the city of nearly 3 million inhabitants. In New York, home to almost three times as many people, that 202 people have been killed to date.

Gun violence is not new to Chicago, where fear is familiar during the deadly summer months. In 2016, one of the most brutal years since the 90’s, 778 people died in the city. The victims of this violence aren’t rich white people who live in their expensive condos overlooking Lake Michigan. The victims are overwhelmingly Black and Latino people in the poor neighborhoods of the South Side and the West Side.

Sox 35th is the name of the rapid transit system’s “L” station near the White Sox stadium, one of the two local baseball teams, next to 35th Street, south of the city’s center. Up to this point, if you decide not to drive your car, it is possible to use public transit and still feel relaxed and safe. You can watch the game and head back north afterward. The next subway stop is 47th Street, then Garfield where generally and at last report no white person can be seen in the subway cars. Poverty and death begin here.

Few cities in the U.S. are as obviously segregated as is Chicago. White people live in white neighborhoods, Black people in Black ones; and Latinos stay to themselves. The poverty rate and the unemployment numbers are disproportionately higher, and medical care is worse where Black and Latino people live. Schools are inferior, as are opportunities. Many here dream of a life like Michelle Obama’s. Hardly anybody will live one.

One often makes money by selling drugs. Gangs, made up of smaller subgroups, dominate the streets and fight for control over every corner. But those who make the money are not those on the street selling the goods. Those errand boys are still just children with guns they cannot even handle stuffed into their jeans drawn whenever conflict arises. This gang violence existed in the 1980s, concentrated in the Cabrini-Green housing project close to the city’s center. Luxury apartments are there today, and the problems have migrated to other neighborhoods.

Distrust Will Not Simply Disappear

The violence has intensified in recent years due to the increase in drug related conflicts. Because of the continuing level of systemic racism and discrimination against Black and Latino people. Because buying a cheap gun on the street is easy.

Those who are familiar with the neighborhoods can feel the anger and desperation of the people. But they also feel the resignation, the adjustment to the fact that almost every family is connected to a gang and to the losses experienced by almost every family. This was already happening long before the coronavirus crisis, which, in turn, particularly affects the poor in the United States.

As in the rest of the country, Black and Latino people in Chicago are contracting COVID-19 at a higher rate than white people, with rising unemployment rates also due to the pandemic. This leads to an increase in violence. And as it does every year, the city’s murder rate rises during the summer months. When it is cold and rainy, fewer people are on the streets. So simple, so cynical. COVID-19 is intensifying all of this.

This year, Chicago could face a particularly deadly year. Apart from the coronavirus crisis, which is making life in the poor neighborhoods even tougher, the anger about George Floyd’s death has made the tense relationship between the citizens and the police even worse.

Police as the Enemy

There are two groups which are hostile to each other. The police union is strong, protects its officers, and is defensive about reform. After the 16 police gunshots that killed Laquan McDonald in 2014, the Justice Department made public a report about the police and called for reform. It was an extremely slow process, despite the presence of African American Mayor Lori Lightfoot. The Democratic mayor was elected in 2019, and she promised, among other things, to change the city structure. After Floyd’s death, Lightfoot admitted that the status quo with regard to police was not sufficient to address the issue of police violence. She doesn’t want to disband the police, which is what a lot of people promoting the hashtag #defundthepolice are calling for. But Lightfoot is set on reforming the police department and taking on resistance from the union if necessary. One idea is a 911 number that would summon not only the police but also a social worker.

But all of that is going to take time. The distrust of the people in Englewood and many other neighborhoods is not simply going to vanish. Too many bad experiences and reoccurring acts of racist police violence have turned officers into enemies. Both sides will have to learn to approach one another again. Chicago is an example of the myriad obstacles to such a process and the length of time it takes to reform.

To put an end to the escalating violence, Trump’s plan to simply deploy federal agents from Washington to reestablish law and order is not sufficient. Those images might be help the president’s reelection campaign, which may precisely be his motivation. It doesn’t help the people of Chicago. Lightfoot has already announced that under no circumstances will she allow federal agents into her city.

What would help the people of Chicago? Long-term structural changes: equal opportunities for education, sufficient social security, good medical care, police reform and, lastly, citizens who are willing to venture past 35th Street further south into the city in order to overcome this invisible boundary. In short, all the things Trump certainly doesn’t want.