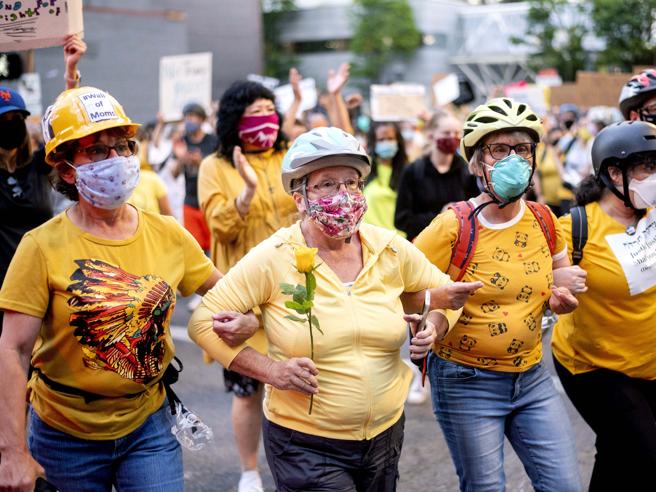 The president sent federal troops, who were certainly not short on tear gas or batons, to restore order among this group of mothers fighting back against Donald Trump.

Rather ironically, Trump’s law and order campaign risks crashing into another wall, the “Wall of Moms” in Portland, Oregon, where protests continue against the killing of George Floyd, an African American man, on May 25 in Minneapolis. COVID-19 has brought these demonstrations to a halt in most large American cities, except for Portland. There, the Black Lives Matter movement has grown, accompanied by a coalescence of the extreme left on the West Coast corridor up to Seattle.

Even Portland Mayor Ted Wheeler and Oregon Gov. Kate Brown, both Democrats, asked the government in Washington to remove the federal troops.

In the meantime, something new and unexpected has been happening in the city. On Saturday July 18, Bev Barnum, a woman previously unknown to the public, married with two children, addressed her 440 followers on Facebook:

“Calling all moms. Let’s do what we do best — protect people. As most of you have read and seen on the news, protestors are being hurt (without cause). And as of late, protestors are being stripped of their rights by being placed in unmarked cars by unidentifiable law enforcement. We moms are often underestimated. But we’re stronger than we’re given credit for. So what do you say, will you stand with me? Will you help me create a wall of moms?”

The Reason behind the Yellow Shirt

Around 30 mothers — and even grandmothers — immediately responded to Bev’s plea. On Saturday night, they lined up in front of the city’s federal courthouse and formed a barrier, holding hands and standing between the demonstrators and soldiers. The “wall” is getting stronger day by day, as well as more organized and combative. Initially, the women were wearing white shirts and jackets, hard hats and protective goggles. Then they changed to yellow, the color chosen by the feminist pioneers of 1860. They displayed classic slogans, such as “Feds go home,” or more creative ones, like “Moms are here! Feds stay clear!”

The Rebellion Has Shocked Trump

It’s a move that is astounding the public and messing up Trump’s strategy. The president first used the occupation of an area in Seattle and now the events in Portland as proof that cities are being threatened by “professional agitators … professional anarchists … people who hate our country … terrorists.”

Trump is accusing governors and Democratic mayors of being “weak” and unable to guarantee safety for U.S. citizens.

In fact, the president is conflating the protests with the increase in crime in certain larger cities. On Monday, July 20, he threatened to send federal soldiers to Chicago, New York, Detroit, Philadelphia and Baltimore, noting the cities were out of control, and that all have mayors who are “liberal Democrats.”