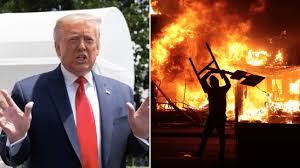 Donald Trump is aware that the polls are not looking good for him. It would be bad for him if this upcoming election was mainly about the pandemic. That’s why he has stopped talking about the coronavirus and is making it sound like the Democrats are to blame for the riots in the cities.

Kenosha, Wisconsin, with 100,000 inhabitants, is best known for a dinosaur museum, good food and a picturesque beach on Lake Michigan. But now Kenosha will go down in American history.

One week ago on Sunday, a 29-year-old Black man named Jacob Blake was shot in the back by a white police officer in front of his three toddler sons and right next to his car. The officer shot seven times; four bullets hit the young man.

He survived, but will likely be paralyzed for the rest of his life. Three days of angry protests ensued, during which cars were set ablaze and stores were looted.

Then on Tuesday night close to midnight, a 17-year-old white man roamed the chaotic streets of Kenosha. He carried a semi-automatic weapon. Kyle Rittenhouse had come to Kenosha from Illinois. After an altercation, he shot and killed an unarmed man named Joseph Rosenbaum. Then he called someone on his mobile phone and said, “I just killed somebody.” A video shows him being chased by a group afterward.

Rittenhouse fell, and then shot Anthony M. Huber, who had raised a skateboard against him. He shot a third person — Gaige Grosskreutz — in the arm. The 17-year-old with the gun was charged with murder. His attorneys claim that he acted in self-defense.

The events of Kenosha are like a Rorschach test: Two groups of Americans see completely different images when they take in the events from Wisconsin. First, there are the president’s supporters. They see a dangerous mob that needs to be controlled by all necessary means. In the eyes of this group, the shooting of Blake is unfortunate, but in the meantime, reports suggest that there was a knife in the car that Blake was approaching. (Eyewitnesses said that he never touched the knife in question.)

For the president’s supporters, Rittenhouse is not just another dangerous protester, but a hero. Tucker Carlson, one of the most popular propagandists on the right-wing TV network Fox News, asked the rhetorical question on his show, whether anybody was surprised at the 17-year-old’s attempt to reestablish law and order in Kenosha; after all, nobody else did.

This used to be the exact argument that Ku Klux Klan supporters made. For them, the men with the white hoods weren’t terrorists, but selfless warriors protecting white Americans — white women in particular — from black hordes, by means of lynch law.

The second group of Americans (the majority) see in Blake another victim of racist police officers, one more name at the end of a list that is way too long. This second group can rightly point out that a white person would not have been treated like Blake. One week ago on Sunday, policemen arrested a drunk white man named Dominic Sanginiti who was carrying a gun in his shoulder holster, as well as a knife in his pocket. Furthermore, he was resisting arrest.

Sanginiti is alive and well. This second group despises riots and arson, but does not believe vigilante justice is an appropriate answer. Democratic presidential nominee Joe Biden expressed precisely what this majority feels when, in an emotional video message, he condemned the police shooting of Blake, as well as the violent riots.

Trump and his people are aware of the unfavorable polls. Should this election be mainly about the pandemic, which is affecting the United States like no other country in the world (we are nearing 200,000 deaths), it would be bad for Trump. According to polls, most Americans don’t believe that he has done a good job of handling the outbreak. Therefore, the president and his followers are trying to change the subject.

They have simply stopped talking about COVID-19, and are instead making it sound like the riots in America’s cities — cities that are almost exclusively governed by Democrats — are Biden’s fault. Trump is presenting himself as the law and order president. This could work out. Presidential elections are ultimately decided by swing voters in about 15 states. If the Democrats as a party fail to sufficiently distance themselves from violent criminals, these swing-state voters might see Trump as the only alternative to chaos.