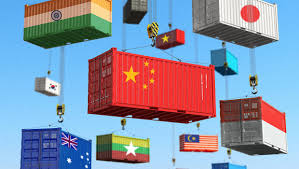 The future of Germany and the European Union depends on the United States and China. Now, the United States has a new president and Beijing has created a gigantic Asian power bloc. It’s the post-Trump era that will be really complicated for Europe.

On Sunday, 15 Asian states concluded the world’s largest free trade agreement. After negotiating for eight years, representatives of all states signed the treaty in Vietnam’s capital city of Hanoi. The Regional Comprehensive Economic Partnership, or RCEP in short, is a titan, even on a global scale. It covers approximately 30% of all worldwide economic output and 2.2 billion people.

With the treaty, international trade policy is being rearranged, and with it the international political priorities. Until now, there were three top dogs: the European Union, the United States and China. Now, for the first time ever, the RCEP has created a Pan-Asian powerhouse that is nearly as powerful as Brussels. The EU — with a population of only about 450 million people — represents some 33% of the global economic output.

Observers project that over the next few years, the balance of power is going to further shift toward Asia, and the economic output of the RCEP will outpace the EU. For Brussels, that means things will be complicated. Now, more than ever, the EU finds itself standing between two superpowers: the United States and a China-led Asia.

The enactment of the RCEP is, first and foremost, a triumph for Beijing. The People’s Republic has been engaged in a trade war with the United States since 2018. Donald Trump tried to reduce the country’s trade deficit with China by imposing punitive tariffs and isolate the country economically. In Washington, this strategy is called decoupling.

But with the signing of the RCEP, the opposite is now happening. China is not decoupling. Instead, it’s deepening its economic ties with 14 Asian countries. This gives Beijing one more opportunity to present itself as a champion of free trade — even though there are doubts regarding China’s stance on free trade.

However, Trump put a sudden end to this plan. Shortly after his inauguration, the Republican president who has a preference for bilateral agreements issued an executive order withdrawing the United States from the partnership. The RCEP is now filling the gap left by the TPP. The RCEP treaty cements the American loss of power in Asia — and in the world of the future.

In this future world, many were longing for a post-Trump era, with the hope of a harmonious trans-Atlantic relationship. But Joe Biden will pursue a tough anti-China policy as well. Europe is facing a new balancing act between the two superpowers. Balancing between the U.S. and China was easier under Trump than it will be under Biden.

The Goal Is the Reduction of Tariffs

The practical significance of the RCEP is the reduction of tariffs. The treaty stipulates common trade rules for areas such as trade, services, investments, e-commerce, telecommunication and copyright law. In addition, the Asia-Pacific region hopes to a facilitate a faster recuperation after the COVID-19 pandemic, and with it, a further shift of power from West to East.

But the RCEP also has significant geopolitical implications. Regarding trade-related matters, in terms of security policy, it binds several countries with close ties to the United States to Beijing, such as Australia, Japan and South Korea. It is the People’s Republic’s biggest win over its geopolitical rival, the United States. This, too, can be seen as a defeat for Trumpism. Trump had handled the traditional alliances with Japan and South Korea in much the same way he handled alliances with Europe, and headed for a confrontation with the Pacific partners.

It remains to be seen whether the RCEP will meet the expectations evoked as the 15 countries signed on. The treaty is set to be ratified next year. Observers expect the enactment of all of the agreement’s stipulations to take a number of years. The reduction of tariffs is probably more of a symbolic gesture. The de facto tariffs for trade within Asia are already extremely low. Not least, the treaty is not going to eradicate the political conflicts between China and its neighbors.

Many neighboring countries are suspicious about Beijing’s territorial claims in the South China Sea. The People’s Republic is currently engaged in a massive conflict with Australia as well. The political tensions arising from that situation recently led Beijing to limit Australian imports.

However, such political tensions between China and its neighbors are not just dangerous for the future of the RCEP. They have resulted in tightly defined limitations. For example, India, which is engaged in a border dispute with China, did not join the pact. Delhi is currently levying relatively high tariffs. With regard to India, a reduction in tariffs would have had a major impact.

For China, the RCEP is a chance to present itself as a champion of free trade. Beijing won’t let this opportunity slip, but will relish it to the fullest. During the 2017 World Economic Forum in Davos shortly after Trump’s inauguration, Chinese President Xi Jinping depicted his country as a model student of globalization. Observers pointed out the hypocrisy of such a presentation. In reality, for instance, China dramatically impedes market access of foreign companies. Protectionism at home and open market economy elsewhere — this is, in a nutshell, China’s globalization model.

For the European Union, the RCEP makes it necessary to act. Trump’s decision to withdraw from the TPP hasn’t diminished Beijing’s influence in Asia. On the contrary, thanks to the RCEP, Beijing is doing better than ever in the field of trade policy. This is going to strengthen Chinese bargaining power. For roughly seven years, Brussels has been negotiating a bilateral investment treaty with Beijing.

The European Union is striving for more access to the market, to public procurement and more legal protection for investors. The treaty was supposed to take effect this year. But negotiations have stagnated, particularly since the beginning of the coronavirus pandemic. Once the RCEP is finalized, Beijing might inflate the political price tag for a bilateral investment treaty with the European Union.

One lesson drawn from the RCEP is this: Decoupling doesn’t work. Beijing is capable of forming new alliances in Asia. Brussels hasn’t participated in Trump’s aggressive decoupling efforts, but Biden has announced EU-backed measures against China’s unfair trade policies.

Despite the gleefulness in Brussels regarding the Democratic president-elect, the closer the European Union’s collaboration with Biden, the more difficult it will be to sign the investment treaty. After Trump, Europe’s balancing act between the superpowers could become even trickier.