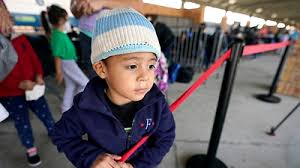 It’s necessary to process applications more quickly, but the government must also strengthen assistance to the region of origin.

Joe Biden’s administration is currently facing a problem that was bound to come across the desk sooner or later, and which, if not handled effectively, could significantly complicate Biden’s time in the White House. A new wave of immigrant arrivals at the southern doorstep of the United States, many of them families with children or unaccompanied minors, has once again cruelly exposed the contradictions of the immigration system. The humanitarian situation at the border with Mexico is dramatic, and the political repercussions are potentially explosive.

At the border, “encounters” (a confusing administrative term that includes any law enforcement interaction with migrants) dropped from more than 130,000 in February 2019 to fewer than 17,000 in April 2020, when the Donald Trump administration took advantage of the pandemic to automatically close the border, freeze the processing of asylum claims and turn back any migrants attempting to enter the United States. Since then, the numbers have steadily increased until this February, when the cases of interactions exceeded 100,000 again. The White House claims it is expecting the largest wave of migrants in two decades. Within the infinite casuistry of the phenomenon, there are identifiable factors driving this surge: the absolute destruction of the fragile economies of Guatemala, Honduras and El Salvador as a result of the pandemic and recent hurricanes; and a false sense that it is easier to enter and stay in the country because Biden has begun to open the processing of asylum requests from people who arrived months or years ago and were blocked in Mexico.

If there is a lesson to be learned from the Trump years, it is that no amount of cruelty will dissuade migrants from attempting to make the border crossing. Immigration is, therefore, not a problem to be solved; it is a phenomenon to be managed. Biden and the Democrats must do so according to the principles which got them elected. In the short term, the Biden administration will have to manage the border in a more humane way than Trump did, which is not difficult, and do so without shirking America’s obligations under international law. The decision not to deport unaccompanied children to Mexico and the unblocking of asylum claims are just the beginning. At the same time, Biden must push ahead with his ambitious immigration reform before the 2022 midterm elections end all rational debate and expose Biden to losing his majority in Congress. Furthermore, he must implement a strategic shift whereby the U.S. engages in the region without meddling, but with vigorous policies to support economic development and crime reduction. If there are any voices in Washington willing to speak honestly and openly about the problem, now is the time to do so.

About Stephen Routledge 102 Articles
Stephen is the Head of a Portfolio Management Office (PMO) in a public sector organisation. He has over twenty years experience in project, programme and portfolio management, leading various major organisational change initiatives. He has been invited to share his knowledge, skills and experience at various national events. Stephen has a BA Honours Degree in History & English and a Masters in Human Resource Management (HRM). He has studied a BSc Language Studies Degree (French & Spanish) and is currently completing a Masters in Translation (Spanish to English). He has been translating for more than ten years for various organisations and individuals, with a particular interest in science and technology, poetry and literature, and current affairs.