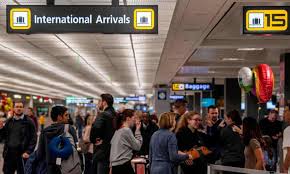 While European countries are preparing to welcome vaccinated American tourists, the United States is still imposing strict access restrictions as part of the fight against COVID-19. Tens of thousands of expatriates have thus found themselves separated from their family or their workplaces for over a year, while waiting lists for visas are getting increasingly longer.

They will soon be able to sunbathe on the Costa del Sol, wander the streets of Rome or visit the Louvre. Vaccinated American tourists will once again be able to enjoy a vacation in Europe after 15 months of restricted access, as part of the fight against COVID-19.

Europeans, for their part, will not enjoy that luxury on the other side of the Atlantic. Worse yet, tens of thousands of families, couples and friends remain separated by 5,000 miles and an ocean.

The root of this situation is the “travel ban.” Although briefly lifted by Donald Trump, Joe Biden, who made the fight against the pandemic his No. 1 priority, reinstated entry restrictions to the U.S. at the end of January for all travelers who have been “physically present, within the 14-day period prior to their attempted entry into the United States” in the Schengen Area, the United Kingdom or the Republic of Ireland.

On social media, the dissatisfaction and bitterness of Europeans are rising through such hashtags as #LiftTheTravelBan and #LoveIsNotTourism, while several petitions are calling for the American border to reopen.

Today, only those in possession of the famous green card – journalists, diplomats, students and dual citizens – may enter the country. By contrast, business travelers, investors and employees working in the U.S. find themselves stuck.

‘Our Children Cry Every Night’

Even those who hold long-term employment-based visas are affected. Those nonimmigrant visa holders must request a national interest exemption in order to return to the U.S.

Those exemption visas, however, are handed out in very small numbers, and “the conditions for granting them remain opaque,” according to Isabelle Marcus, head of an immigration and financial management consultancy firm in the U.S. “They exist in theory but, in practice, they remain handed out in a very random fashion.”*

As a result, most long-term visa-holding expatriates choose not to go to France for fear that they may not be able to come back to the U.S. “It would be too much of a risk. Overnight, we may find ourselves without a job, a house or a school if we get stuck in France,” explained Caroline Ruszkowski, a French expatriate who settled in Los Angeles with her husband five years ago. “Our children cry every night wondering if they’ll be able to see their grandparents and childhood friends again. It’s hard.”

“I pay my taxes in the U.S., I work in the U.S., the whole family has received the vaccine, it’s extremely frustrating,” laments Vincent Taglioni, who has not been back to France for two years. “We can’t see what it has to do with the health crisis anymore. We feel discriminated against.”

1-Year Wait for a Visa

Given these travel restrictions, European expatriates are often compelled to travel via a third country to come back into the U.S., usually Mexico, where the virus still circulates actively.

Julien Girard, an astrophysicist in Baltimore who had planned to go back to France in the summer, is apprehensively considering this solution. “By spending two or three weeks in Mexico, we are taking risks, spending money, worrying and wasting time. I know there are people out there who are suffering a lot more and that it can seem like a ‘rich people problem’ but the situation is absurd.”

As for those Europeans who are trying to obtain an initial visa or renew a residence permit, the delays have become unbearable. According to the State Department website, the waiting period for an appointment for a nonimmigrant visa at the American Embassy in Paris is over 400 days, while in London, only emergency cases are currently being processed by the consular services.

“The situation is rather surreal,” confirms Damien Regnard, a senator for French citizens living abroad. “The American diplomatic network is strained thin because of remote working and staff shortages.”

Toward a Resolution at the G-7

As vaccinated U.S. citizens are getting ready to return unencumbered to the old world, more and more voices are calling for reciprocity on both sides of the Atlantic.

“Europeans must encourage the U.S. to lay out the health-related criteria which dictate the lifting or upholding of the restrictions so that we can contemplate a reopening schedule,” said Célia Belin, who holds a doctorate in political science, in a column she wrote for Le Monde.

But for now, lifting the travel ban is not under consideration. “The Centers for Disease Control, as well as other federal agencies, are very attached to their autonomy and independence from the government and maintain a somewhat firm, but not always very rational, position,” Regnard said. “In reality, there is only one person today who can break down this door: President Biden. It is in the interest of the U.S. because we are vaccinated, tested, and economic life must get going again.”

The president’s upcoming visit to Europe, first for the Group of Seven summit, then for a European Union summit on June 15, offers hope that travel restrictions will evolve, even though the subject is not officially on the agenda.

“Our authorities and their European partners are working relentlessly toward a relaxation [of the restrictions] but there are no proceedings in place to date,” says Hervé Linder, a lawyer and immigration specialist in New York, who does not hold much optimism regarding a resolution of the situation.*

“The problem lies mainly in that Europe makes a distinction between vaccinated and nonvaccinated travelers. This is not the case in the U.S., where the discriminatory criteria are very closely monitored.”*

The status quo could therefore win out and make collateral victims of the thousands of European families who have been immersed in anguish and uncertainty for more than a year.