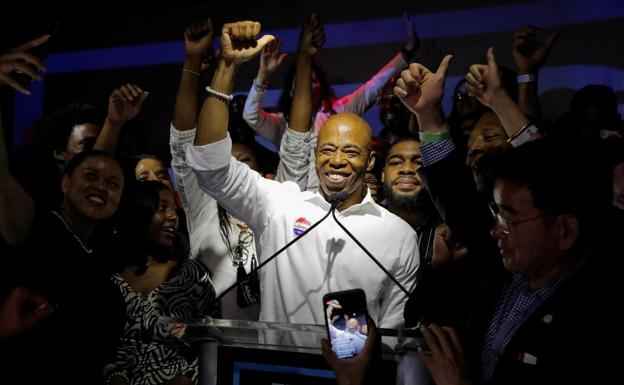 The increase in crime and homicides gives an ex-police officer the lead in the Democratic mayoral primary.

For more than two decades, New Yorkers have complained bitterly that their bohemian city, a mecca for artists, was being transformed into a theme park for tourists and millionaires. But as soon as the pandemic brought back the rust of the ’80s, panic spread. The first results of the mayoral primary on Tuesday made it clear that New Yorkers may massively support the Black Lives Matter movement, but not its proposal to defund law enforcement. The sound of bullets in the streets is louder than they sound in videos that go viral. The two candidates who received the most votes in both parties are taking a tough stand against crime and intend to make the city shine so that it can attract the tourists that businesses need.

“No one is coming to New York, in our multibillion-dollar tourism industry, if you have 3-year-old children shot in Times Square,” said Eric Adams, the Democratic candidate who won the most votes among Democrats in the primary*, during a a debate. He was referring to the shooting on May 8 that defined the campaign. On that day, an argument between two street vendors who were selling CDs ended in gunfire, and the stray bullets hit three pedestrians, among them a woman with a 4-year-old girl. Adams, a 60-year-old ex-police officer and the Brooklyn borough president, wasted no time in getting to the crime scene to defend his proposals on safety. That gave him a 24-hour advantage over the favored candidate, former presidential candidate Andrew Yang, and in the end, gave Adams more than 20 points.

The city was starting to return to normal and the Zoom campaign was over. The scene demonstrated the advantage of real life, something with which virtual life could never compete. The irony is that Adams had stepped away from Manhattan, where he was polling in last place, to concentrate on neighborhoods in Brooklyn and the Bronx, where he introduced himself as one of them. It did not take much for him to label Yang, an Asian American who lives close to Times Square, as someone who only mobilizes for his own community, particularly when he arrived on the crime scene 24 hours after Adams. “It should not have taken gunshots blocks from his home,” Adams criticized.

Aside from strategy, New York in the pandemic stirs up many ghosts inside and outside the city. George Floyd is buried, Donald Trump is still alive and kicking. The Democratic establishment worries that, if it does not side with law and order, it will open the way for Trump’s return in 2024, when Trump is threatening to run for reelection. In New York alone, violent crimes have soared, with 68% more firearms and a 12% increase in homicides. Attacks on the subway have forced a deployment of security forces that, according to Gov. Andrew Cuomo, are faced with a lack of police officers. The 3,250 officers who now patrol the city have not even been enough to persuade New Yorkers to return to the subway, which carries fewer than half the number of passengers compared to before COVID-19. The lack of safety has become the main subject of the campaign, which the initial voting results made clear.

It is such a progressive city that the winner of the Democratic primary will immediately become the firm favorite to succeed Bill de Blasio in November. Adams, just like the first mayor of color, David Dinkins, who was elected in 1989 to end crime, appeals to those who show solidarity against social inequality and racism in a country that is horrified with itself, but is not prepared to give up the tough stance it relies on to maintain its supremacy.

The complicated ranked voting system that is being used for the first time in these elections could flip the Democratic results, as voters are now permitted to express their preference for five candidates from among more than 12 who qualified for the ballot. After it counts all the mail-in votes, which are especially numerous due to the pandemic, the election commission will begin to eliminate the candidates with the fewest votes and add the second preference of the mail-in voters to the rest of the count until someone wins 50% of the vote. Anything is possible. What is certain is that the winner will face Republican candidate Curtis Sliwa, with the mission of proving that, under his administration, the streets and the subway will be safer.

*Editor’s Note: Eric Adams was ahead in early tabulations of the ranked-choice Democratic primary. Final results are not expected until mid-July.