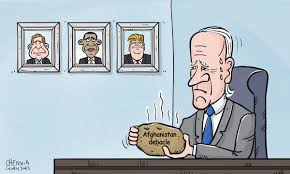 The attack in Kabul harms the credibility of the United States in Afghanistan.

The United States-NATO mission in Afghanistan has finished exactly as it started: with a suicide bomber. For the past two weeks the world has attended to the desperation of thousands of families who crowded together with children and suitcases around the Kabul airport, looking for a way out of the country after the Taliban Islamists took control. On Thursday evening, in the middle of the chaos, a suicide terrorist blew himself up. The provisional death count is 170 people, to which we must add 13 American soldiers (the biggest hit in a decade). The scenes of horror, among people who had already lost everything, are a macabre ending to a complete and complex withdrawal, with unpredictable future repercussions for the United States and its president, Joe Biden.

According to the events that have taken place, Biden is no longer the same president as in April, when he announced the date of the withdrawal as if it were a maneuver (“we’ll do it responsibly, deliberately and safely”). He is not the same as last week, when he warned of the consequences if his soldiers were to be attacked in Kabul. When on Thursday Biden threatened to “hunt down” the murderers from the airport and “make you pay,” he spoke enveloped in an aura of inescapable helplessness. Upon setting a fixed date for the end of the mission, Biden made the objectives dependent on the calendar, not the other way around. The schedule has been met but the mission is not complete. The president also acted against the advice of his military leaders. Biden will have to explain how much the aim to have Afghanistan as a closed chapter by the 20th anniversary of 9/11 has weighed on his chain of decisions.

NATO’s allies had managed to get 105,000 people, among them Afghan nationals and collaborators, out through Kabul airport prior to this Friday. Various European countries gave this Friday as a goal for the completion of the mission. The frenetic operation was carried out thanks to the Taliban’s collaboration. CIA Director William Burns had a secret in-person meeting with Taliban leaders in Kabul on Monday. Afghanistan’s new government warned that the mission would end Aug. 31, a date for which they had not planned. According to The New York Times, on Monday 250,000 people with the right to evacuate remained in Afghanistan. Recent movements suggest that the U.S. and NATO will try to maintain international flights.

The erosion of political and media trust that this disaster puts on Biden harms the beginning of his term of office. That is an unforeseen consequence, except for those who could have prophesized a catastrophe like that of the last few days.

The attack was condemned by the Taliban and defended by Islamic State terrorists in Afghanistan (ISIS-Khorasan being their official name). They are jihadis who oppose the Taliban’s agreements with the U.S. and who have become a threat to the stability of the proper Islamist regime. In the worst-case scenario, the attack would eventually mean the birth of a civil war in which it is in the West’s best interest, what harmful irony, for the Taliban to win. Two decades of military intervention have, definitely, left behind a country in which the only institution that functions is a guerrilla group of fanatic Islamists, on whom the West depends to control a new rise of jihadi terrorism.

About Amy Bathurst 11 Articles
I am a native English speaker from the UK, with a Bachelor's degree in Modern Languages. I absolutely love learning foreign languages and discovering the differences between them. My favorite languages are romance languages, specifically Spanish and Italian. In my free time, I love reading, baking and drawing.