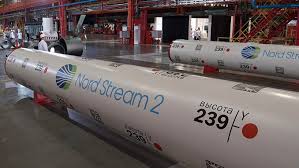 Russia considers Nord Stream 2 to be an exclusively economic project and will not use the pipeline to serve geopolitical interests, Russia’s Deputy Minister of Foreign Affairs Andrey Rudenko told TASS. A spokesman for the U.S. State Department has called Nord Stream 2 a dangerous geopolitical project that has nothing to do with gas supplies. In turn, Ukraine’s President Volodymyr Zelenskiy alleged that Nord Stream 2 threatens his country’s national security and that of the entire region.

“For us, Nord Stream 2 remains an exclusively economic project. We aren’t going to use it, as the Ukrainians are saying, in any geopolitical calculations. We don’t need that,” says Rudenko. The deputy minister noted that Russia will be ready to exploit all opportunities to satisfy European demand after its contract on gas transit through Ukraine expires in 2024. “We’ve stated on many occasions that we’re prepared to continue using the Ukrainian gas transportation system for gas supply in the event of need or requests from our European partners,” Rudenko said.

Pipelaying work for Nord Stream 2 was completed on Sept. 6. Germany has promised to introduce sanctions should Russia use gas transit to apply pressure on other countries, including Ukraine. On Sept. 17, Zelenskiy signed an order creating a task force for “the minimization of threats from the construction of pipelines which bypass Ukraine.”

On Sept. 11, the U.S. Department of State’s Senior Advisor for Energy Security, Amos Hochstein, said that Washington will continue working to halt the launch of the Nord Stream 2 pipeline. He called Nord Stream 2 a dangerous geopolitical project that threatens European countries and has nothing to do with the gas supplies.

About Noah Nguyen 10 Articles
Noah Nguyen is a translator and writer of fiction based in the U.S.. He is enthusiastic about his work with Watching America and continues to develop his skills in translation. Noah's fiction stories, which are set in the Warhammer universe, have been published by Black Library.