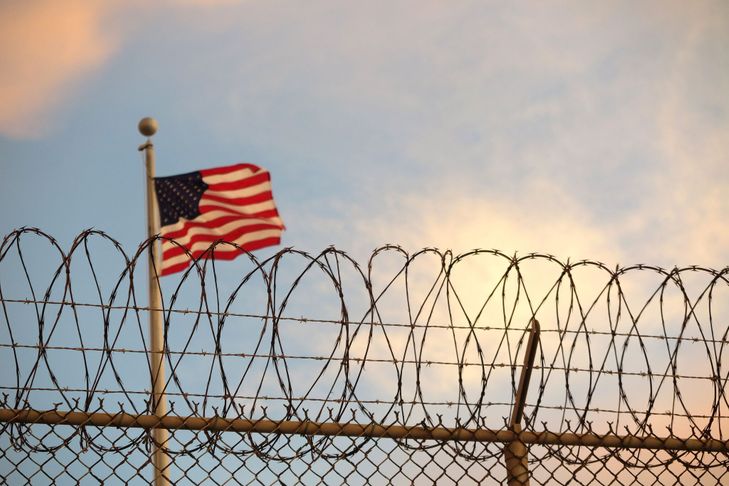 Twenty years after the attacks on New York and Washington, the American prison at Guantanamo is still in operation on the American base in Cuba. Thirty-nine people are still being held there, including the alleged masterminds behind the 9/11 attacks, whose trial, along with that of four other defendants, resumes Tuesday, Sept. 7.

In October 2018, an American flag waves over the prison at Guantanamo. A legal black hole since its inauguration and a symbol of the excesses of George W. Bush’s “war against terror,” the American prison at Guantanamo has disappeared slowly from the political debate. Still, it remains in operation, while the war that justified it in the eyes of the American administration, the war in Afghanistan, is itself officially over.

Still a Quarantine for Detainees

Opened in January 2002 to hold illegal combatants captured in Afghanistan, the American prison at Guantanamo still holds 39 detainees. A total of 780 men and minors have been processed through this place designed by the Bush administration to lock up, far from American soil, detainees the United States did not recognize as prisoners of war. At the height of the war against terror, 675 people were imprisoned at Guantanamo.

In July, the Biden administration proceeded with its first transfer, Abdul Latif Nasser, a Moroccan detainee since 2002 accused of having collaborated with the Taliban. However, not a single charge had been brought against him and he has been declared “releasable” since 2016.

Under Donald Trump’s administration, however, Nasser’s proceedings never progressed. Ultimately, he would have to wait five years for the Republican president to leave office to be freed and return to his country of origin.

5 Detainees Alleged to Be Involved in the 9/11 Attacks

Among the 39 detainees still in Guantanamo,10 are in the same situation as Nasser: they have also been declared releasable by a commission made up of principal American agencies, including the FBI and CIA. Eighteen others are behind bars, without a single charge against them.

Among these last prisoners at the American base in Cuba, only 11 have been formally charged. Five are targeted for having participated in organizing the 9/11 attacks. Captured in 2002 and 2003, the alleged masterminds behind the attacks and four other prisoners are accused, among other things, of terrorism, and face the death penalty.

Charged in 2012, they await judgment, which is not expected for several months. Trial proceedings, halted at the beginning of 2019 because of the COVID-19 pandemic, resumed Sept. 7. But the military trial has generated a great deal of argument between the prosecution and the defense, which explains, in part, why justice at Guantanamo is so slow. One of the delicate issues involves whether the prosecution’s evidence is admissible, particularly because it was gathered through very controversial interrogation techniques during the Bush years.

Like Barack Obama before Him, Joe Biden Wants To Be Done with Guantanamo

Ever since he took office, Joe Biden has made it clear that he wants to close Guantanamo. But how? Barack Obama signed an executive order to close this symbol of the Bush years as soon as he took office in January 2009. This order was never carried out because Congress opposed repatriating the detainees on American soil.

Even if he has made it public that he wants to close Guantanamo, Biden is more prudent than his Democratic predecessor. His administration quickly restored the commissions that existed under Obama and asked them to evaluate the eventual transfer of detainees who have not been charged to another country.

According to the Center for Constitutional Rights, which is defending the detainees in court, Guantanamo prison costs about $540 million per year; currently about $13 million per detainee. That makes it the “most expensive prison in the world,” according to the CCR.